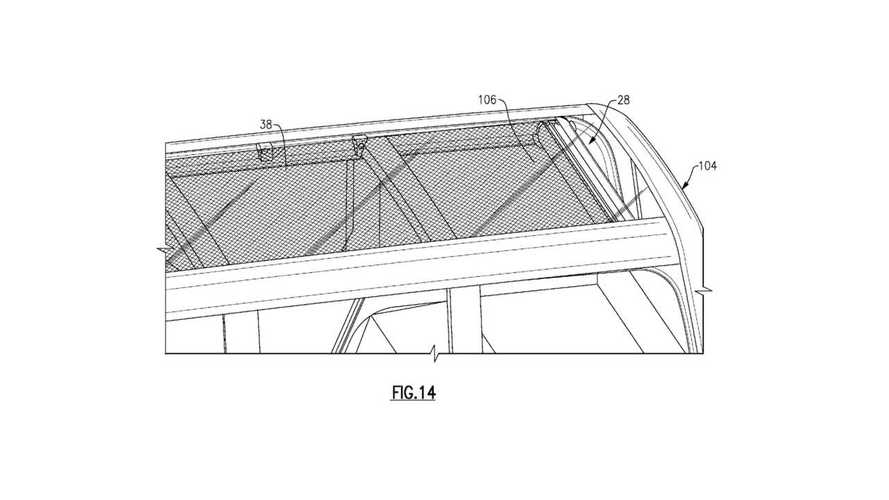 And, from what we see so far, it could be very cool.

Last week, we reported that Ford has filed a patent for removable doors and removal impact beams, which are both believed to be linked to the reborn Bronco SUV. The drawings showed a two-door, probably pickup-based vehicle which somehow reminded us of the Bronco II – that’s more than a strong hint the new production model could feature removable doors. Now, new patent sketches suggest the model might also get a retractable cloth roof.

Ford Applies For Scout And Bronco Scout Trademarks In The U.S.
⠀

This Classic Ford Bronco Is Fully Electric And To Die For

Yes, the headline pretty much tells the whole story here but wait – there are a few interesting details we want to share. The drawings, once again uncovered by MotorTrend, reveal the new Bronco could have a removable cloth cover which is used once the hard top is removed. This cover will have two layers – one mesh layer and one cloth layer. Simply put, you’ll be able to choose from three different roof configurations – a full open-air experience, some sun and wind protection, or a complete cloth cover.

But wait, there’s even more. If you take a look at Figure 15 (first picture in the gallery above), you’ll see the cloth roof pulled back and supported by stakes. This means the cloth cover could be transformed into a basic awning which sounds like a great idea matching the Bronco’s adventurous spirit. Just imagine you are out fishing or camping, and you’ll get the idea.

Is Ford's Removable Door Patent Linked To The New Bronco?

Ford Puma Trademark Application Could Be For Baby Bronco

Of course, this new patent, as well as the previous one with the removable doors, doesn't mean Ford is actually going to put these cool options into production. But, again, both they look like a great opportunity for Ford to position the new Bronco as a direct competitor to the Jeep Wrangler, despite the expected less rugged design, and give customers more reasons to visit dealers of the Blue Oval rather than FCA showrooms.