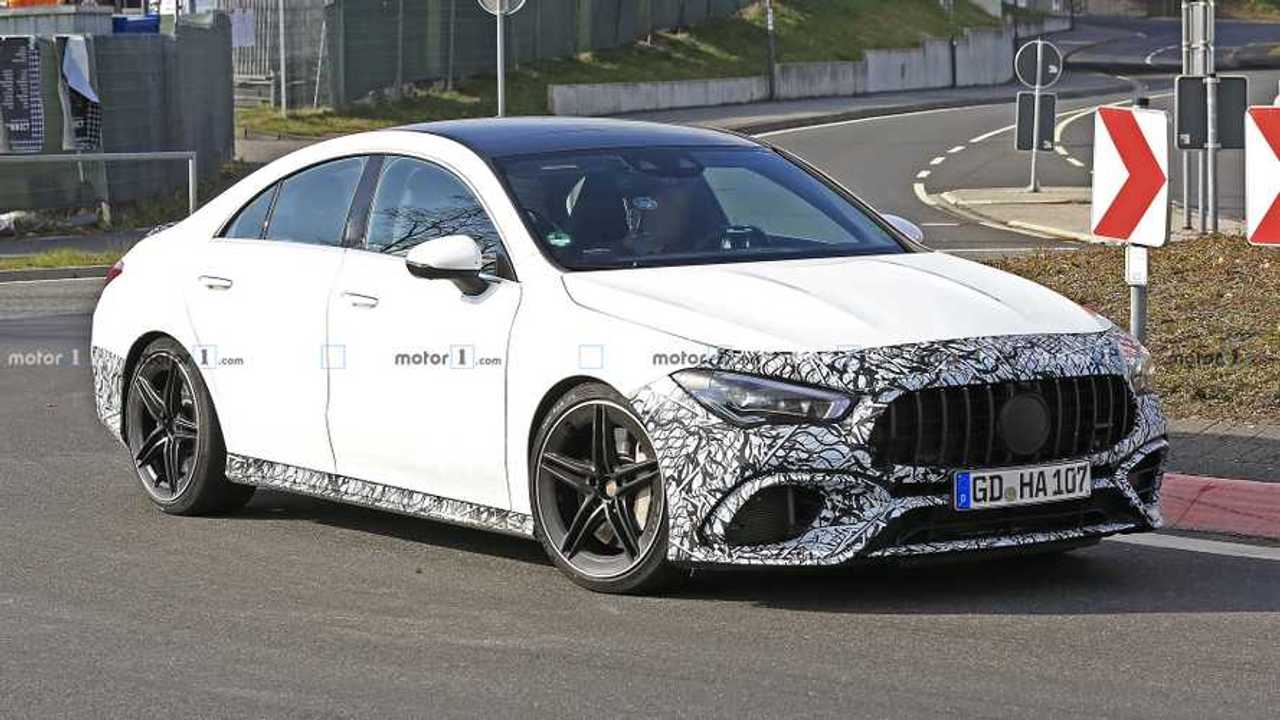 Behind that Panamericana grille are up to 416 horses.

[UPDATE, April 3] 16 new images have been added at the beginning of the gallery, below.

It was only yesterday when Mercedes-AMG teased the new A45 and now our spies have sent us some fresh photos of the hot hatch’s swoopy sedan sibling. Carrying less camouflage than ever before, this is by far our best look yet at the second-generation CLA 45. You can basically see everything as even though there’s still some swirly disguise here and there, the layer is so thin it practically reveals the production-ready design.

From the Panamericana grille up front to the quad exhausts at the back, this is without a shadow of a doubt the full-fat 45 model. There are other clues pointing towards the direction of the flagship model, such as the generously sized trunk lid spoiler, rear diffuser, AMG-branded wheels, and those large air intakes up front. The prototype looks as if it’s glued to the road thanks to a stiffer suspension setup reserved to the 45 variant.

Mercedes hasn’t said a word about what will power the new CLA 45, but it can only be the very same turbocharged 2.0-liter gasoline engine set to debut in the upcoming A45. It’ll be good for 383 horsepower in the base version and 416 in the hotter S model, with both versions set to use an eight-speed, dual-clutch automatic transmission. The all-wheel-drive 4Matic system will be standard, and at least the S version should have a drift mode.

Should you want to carry more stuff in the back, there’s a pretty good chance Mercedes-AMG will come out with another CLA 45 Shooting Brake, but not for the U.S. market where the stylish wagon is not available.

When can we expect to see the new CLA 45? It will take a while. Logic tells us the A45 hatchback will be the first to come out, followed by the A45 Sedan and then the CLA 45, with the wagon counterpart to arrive shortly thereafter. To spice things up, Mercedes-AMG will also sell a CLA 35 alongside the A35 Sedan unveiled earlier this week.

The AMG CLAs Are Coming:

Mercedes-AMG CLA 35 Shooting Brake Spied [UPDATE]
++
Got a tip for us? Email: tips@motor1.com