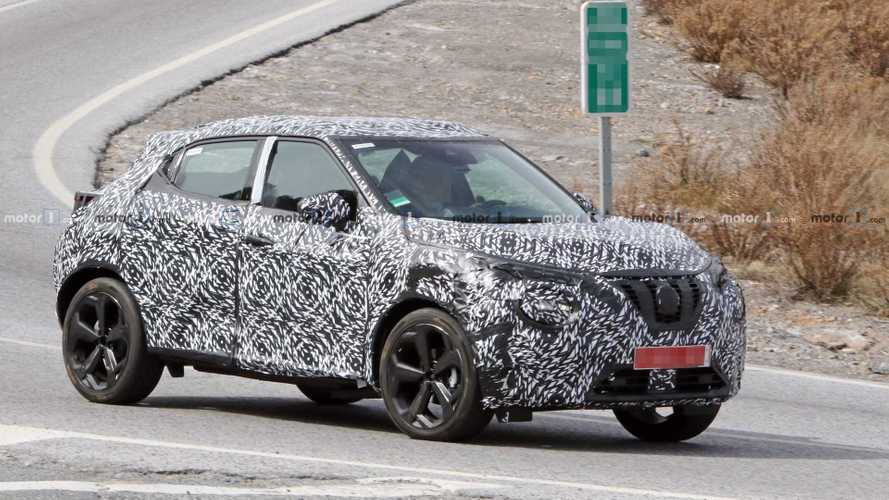 The curious compact crossover should arrive before the end of the year.

It was only a few days ago when our spy team caught a new Nissan Juke prototype wearing a heavy coat of strange camouflage while testing in southern Europe. Perhaps the temperatures have warmed up in the area, because the Juke is back and this time it’s dropped the big black cloak for some skin-tight camo wrap. While still not all-revealing, these shots give us a considerably better look at what the new Juke has to offer.

In this stripped-down form, it’s clear the crossover’s quirky styling will make its way to the new model. The large round driving lamps are easy to spot, though to the casual observer they probably look like headlights. The actual headlights are further up and still have a thin, angular shape though they appear to be mounted a bit lower. In fact, it’s possible the Juke’s redesigned grille could adopt styling cues from the Nissan Leaf, which would likely incorporate those headlights to create something a bit more proportional as compared to the current model.

We can’t get too caught up in design details because we suspect there are some false body panels under the camo wrap. The fenders and roof have some oddly shaped lines and extra bulk, but we can still see enough to know the Juke’s fundamental shape will live on with the next-generation. Speaking of which, the new Juke will share its new CMF-B underpinnings with the Renault Clio V, and aside from a smattering of internal combustion engine options, hybrid and even fully electric models could eventually arrive.

For the more immediate future, look for the new Juke to offer small three-cylinder turbocharged engines and possibly a 1.5-liter diesel. As for when that immediate future begins, our sources are now telling us a reveal later this year is highly likely. The Frankfurt Motor Show in September is a likely candidate.