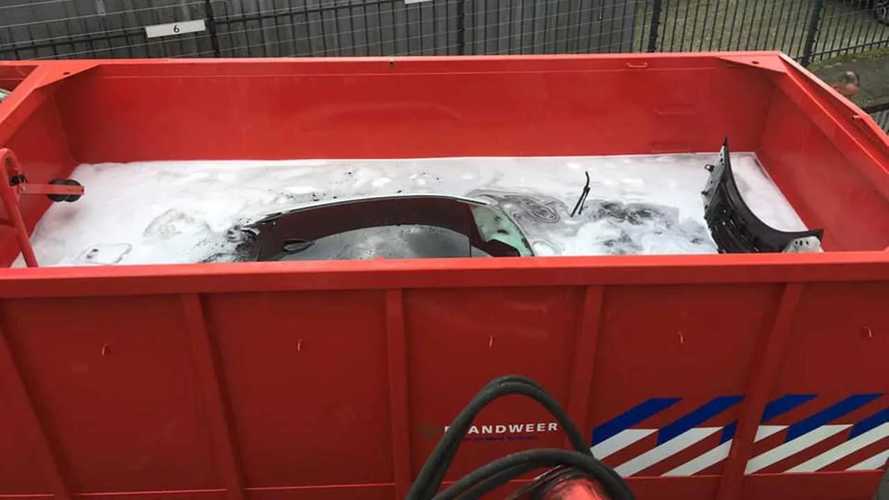 This isn't a response to a car fire that we're familiar with.

Firefighters in The Netherlands responded to a smoking BMW i8 at a dealer by picking up the hybrid coupe with a crane and dumping it into a huge tank of water. The car remained underwater for 24 hours to be very certain that the vehicle didn't burst into flames.

The following is an English translation of the fire department's message on Facebook: "This morning an electric car started to smoke in a showroom. The employees of the garage and the fire brigade acted quickly to drive the car outside. Because it is an electric car, inventive action was necessary. The car is immersed in a container of water because extinguishing it in the 'normal' way is difficult with these cars. The car will remain in the water basin for the next 24 hours."

Gallery: BMW i8 Fire In Netherlands

Electrified vehicle fires require different tactics than combustion-powered automobiles for extinguishing the flames. For example, a guide from Tesla to firefighters says that "approximately 3,000 gallons of water applied directly to the battery" is necessary.

Fire Truck Tips Over When Coming In Too Hot During Demonstration
⠀

What's not clear is whether this is the fire department's usual reaction to an electrified vehicle fire. Traveling with a crane and giant water tank doesn't seem very convenient. Plus, if the BMW were already in flames, picking it up and placing the coupe into container doesn't seem safe.

The Latest BMW i8 News:

Save The Planet, Bid For This BMW i8 Art Car By Milan Kunc

The current i8 packs an 11.6-kilowatt-hour battery, rather than the 7.1 kWh from earlier model years of the coupe. Its electric motor produces 141 horsepower (105 kilowatts) and 184 pound-feet (249 Newton-meters). It allows for 18 miles (28 kilometers) of driving purely on electric power.