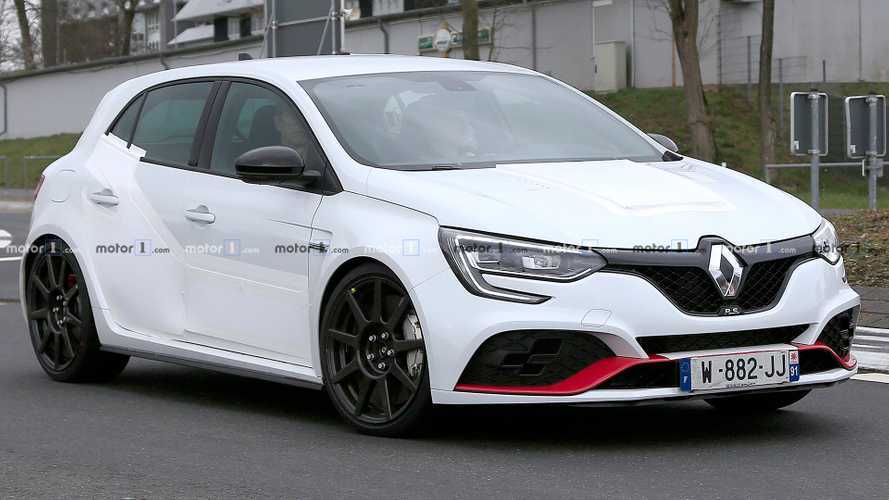 The Trophy-R sheds weight to go even quicker around the track.

The Renault Megane RS Trophy-R prepares to turn up the heat on the already hot hatch, and these spy shots catch the more hardcore model testing at the Nürburgring. Europeans should be able to buy the circuit-ready model before the end of the year.

This test mule features a power bulge in the hood that the engineers cover in white cladding. More of the concealment material is on each side of the machine, and it rises upward at the rear fenders. Since these pieces don't seem to hide modifications to the body, they might be hiding stripes that would pick up the red accent in the front fascia. The development team blacks out the lower area at the back, which hides tweaks to the diffuser and exhaust.

This Trophy-R test mule rides on black nine-spoke wheels. There are big, silver calipers visible behind them at the front, but the stoppers are red at the back. The different colors are a little odd, but Renault could paint them in matching hues for the production version of the hot hatch.

Powertrain tweaks for the Trophy-R aren't entirely clear. The standard Megane RS Trophy packs a turbocharged 1.8-liter making 296 horsepower (221 kilowatts) and either 295 pound-feet (400 Newton-meters) with a manual gearbox or 310 lb-ft (420 Nm) with the optional dual-clutch transmission.

The Trophy-R allegedly puts a focus on shedding additional weight. For example, Renault Sport reportedly strips out the rear seats in an effort to cut as many pounds as possible, despite still having four doors. This test mule also lacks the fog lights in the front fascia, which would slice off a little more mass.

Renault Sport reportedly aims for the Trophy-R to break the Honda Civic Type R's record as the quickest front-wheel-drive vehicle around the Nüburgring Nordschleife. To take the title, the Renault would need to lap the Green Hell in less than 7 minutes and 43.8 seconds.