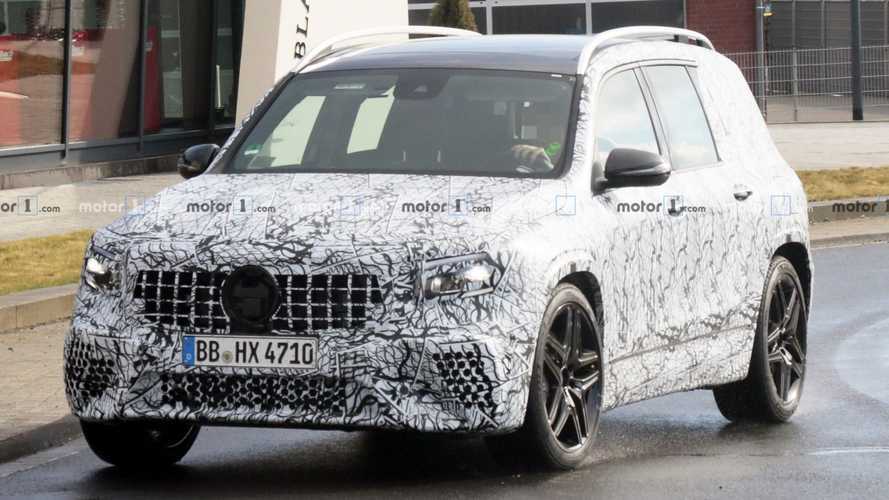 If you’re old enough to remember, there used to be a time when the A-Class was the only compact car in Mercedes’ portfolio. Things have dramatically changed since the late 1990s / early 2000s as the lineup now includes an A-Class Sedan, long-wheelbase A-Class Sedan (for China), B-Class, CLA, CLA Shooting Brake, and the GLA. Pretty soon, these will be joined by a boxy crossover in the shape of the GLB, which itself will spawn at least this AMG 35 version. Further down the line, we don’t see a reason why there shouldn’t be a full-flat AMG 45 model as well.

As for the prototype at hand, it appears to be wearing most of the production body, although it might be missing the final front grille. Chances are the bumper and the grille will have a lot in common with those of the A35 warm hatch from where the sporty crossover will inherit many of the bits and pieces. Chunky wheels with generous brakes denote this is an amped-up version, as does the lowered sports suspension. At the back, the dual exhaust is a telltale sign we’re dealing with the "35" model since the tips are a spitting image of those of the aforementioned A35.

We don’t get to check out what’s going on inside this test vehicle, but having seen the new-era compact cars from Mercedes, the GLB’s cabin should be largely carried over from the other models. That’ll obviously include the swanky dual digital screen setup part of the MBUX infotainment system, along with just about everything else we like about the high-end interiors of recent small Mercedes models.

Underneath the hood, a turbocharged 2.0-liter gasoline engine will deliver 302 horsepower and 295 pound-feet (400 Newton-meters) of torque to the standard 4Matic all-wheel-drive system through a seven-speed, dual-clutch automatic transmission. With the A35 needing 4.7 seconds to reach 62 mph (100 kph) from a standstill, the GLB 35 will probably take closer to 5 seconds to complete the task due to its slightly higher weight. Top speed is likely going to be electronically capped at 155 mph (250 kph) as it’s the case with the hatch.

It will take a while before we’ll see the AMG version considering Mercedes hasn’t even revealed the regular GLB yet. Expect the standard variants of the crossover to be unveiled later this year, with the AMG to follow early 2020.