BMW Previews iX3, i4 And iNext EVs In Cold-Weather Teaser 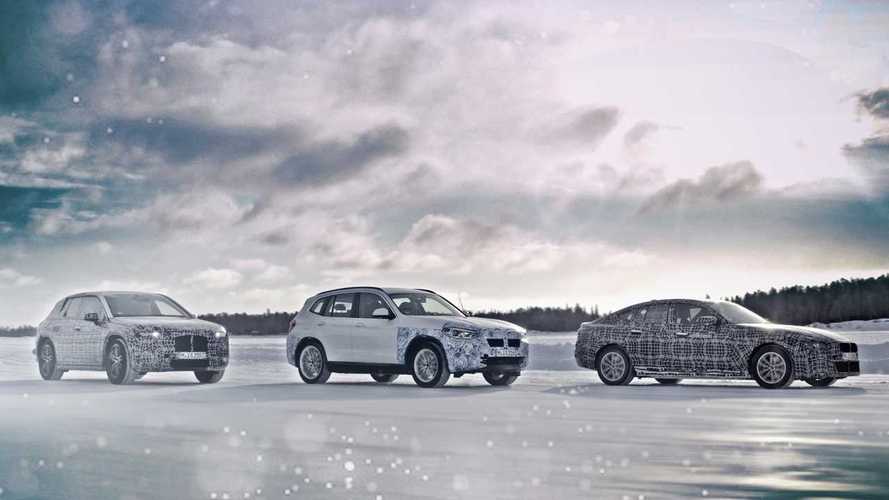 All three will be in production by the end of 2021.

BMW wants you to know it’s getting serious about electric vehicles. After all, it’s not every day an automaker sends out its own “spy” photos attached to a press release divulging various details. Admittedly the details are as vague and generalized as a politician’s promise, but the takeaway here is that Munich will soon offer mainstream EVs that aren’t oddly-style boxes or sexy supercars. Getting a bit more specific, the photo above (and the gallery below) features the almost-primetime-ready BMW iX3 SUV as well as the i4 four-door and iNext crossover.

Of these, the iX3 garners our immediate attention because it’s confirmed as entering production next year. That means we’ll likely see the compact SUV revealed later this year, showing us its solid kidney grille and fifth-generation BMW eDrive technology and boasting a range of over 249 miles (400 kilometers). BMW also says it can access 150-kilowatt charging stations, which supports the rumors we’ve heard that it can be fully recharged in just a half hour.

As it stands, the automaker tells us in the teaser that the iX3 is going through a key phase of cold-weather testing on frozen lakes in and around BMW’s testing center in Sweden. Our photographers can confirm that, courtesy of the latest non-manufacturer-supplied spy shots featured in the gallery below.

For that matter, the i4 four-door “coupe” and iNext crossover are said to be experiencing the same testing schedule, though we haven’t caught those machines on the road. However, BMW does tell us the i4 should have a range of over 373 miles (600 kilometers) while also offering enough punch to hit 62 mph (100 km/h) in four seconds flat. We’re also told that i4 production will begin in 2021.

On the abstract side is the iNext. BMW calls it the company’s technology flagship featuring Level 3 autonomous driving capability and a range equal to the i4. It will ride on the automaker’s future modular platform and will incorporate “the latest innovations” for design, connectivity, and electrification. We weren’t kidding about vague details, but one definitive number for the iNext is a production date of 2021.

Coupled with the existing i3 and i8, BMW’s all-electric lineup should soon offer a little something for everyone seeking to break free of internal combustion power.

Electromobility under extreme conditions: The BMW iX3, the BMW i4 and the BMW iNEXT undergo cold testing in the Arctic Circle.

Prototypes of the next all-electric models from BMW i are jointly undergoing comprehensive vehicle tests at the winter test centre in Arjeplog – intensive development programme preparing for market launch in 2020 and 2021.

Munich. BMW i is preparing to launch the next generation of solely electrically powered models. Three of the brand’s electric models are currently going through a key phase of their series development process at the BMW Group’s winter test centre in Arjeplog, Sweden. Together with the BMW iX3 already due to go on sale next year, the BMW i4 and the BMW iNEXT, being brought to market in 2021, are also completing an intensive test programme. Within the framework of comprehensive vehicle testing, their drive and suspension components are being put to the test under extreme weather and road conditions. The testing area situated at the edge of the Arctic Circle provides the ideal requirements for this purpose. On the icy surfaces of frozen lakes, on snow and in the bitter cold, the electric motors, the high-voltage batteries and the power electronics of BMW eDrive technology as well as the suspension control systems are demonstrating their high level of performance and reliability.

The latest chapter of the BMW Group electrification strategy will be heralded by a Sports Activity Vehicle. Starting next year, the BMW iX3 will already feature the fifth generation of BMW eDrive technology for the first time. An exceptionally powerful electric motor and a high-voltage storage unit featuring state-of-the-art battery cell technology facilitate purely electric driving pleasure in a new dimension. With a range of over 400 kilometres* and the possibility to use DC charging stations with a capacity of 150 kW to charge its battery, the first all-electric SAV is ideally suitable for day-to-day use and long-distance travel. The BMW iX3 will be the first model produced for the entire global market by the BMW Brilliance Automotive Joint Venture at the Chinese production location in Shenyang.

The BMW i4 delivers locally emission-free driving pleasure combined with outstanding sportiness. The four-door coupe positioned in the premium midrange segment combines a dynamic design with inspiring performance and a high level of ride comfort. Fifth-generation BMW eDrive technology featured by the BMW i4 facilitates a range of over 600 kilometres*. Moreover, the electric motor’s spontaneous power development can be utilised above all to achieve a dynamic driving experience. The BMW i4 sprints from a standstill to 100 km/h in a mere 4 seconds and reaches a top speed of over 200 km/h. The BMW i4 will be produced at the BMW Munich plant starting 2021.

With the proportions and dimensions of a luxury Sports Activity Vehicle, a fifth-generation electric drive unit and systems for highly automated driving, the BMW iNEXT embodies the future of driving pleasure in a particularly comprehensive way. As the BMW Group’s future modular construction system, it combines the latest innovations in the areas of design, automated driving, connectivity, electrification and services (D+ACES) defined by the NUMBER ONE > NEXT corporate strategy. BMW eDrive ensures a range exceeding 600 kilometres*. Furthermore, the car is equipped with the latest connectivity features and designed for Level 3 automated driving. The BMW Group’s new technology flagship will be produced at the BMW Dingolfing plant as from 2021.