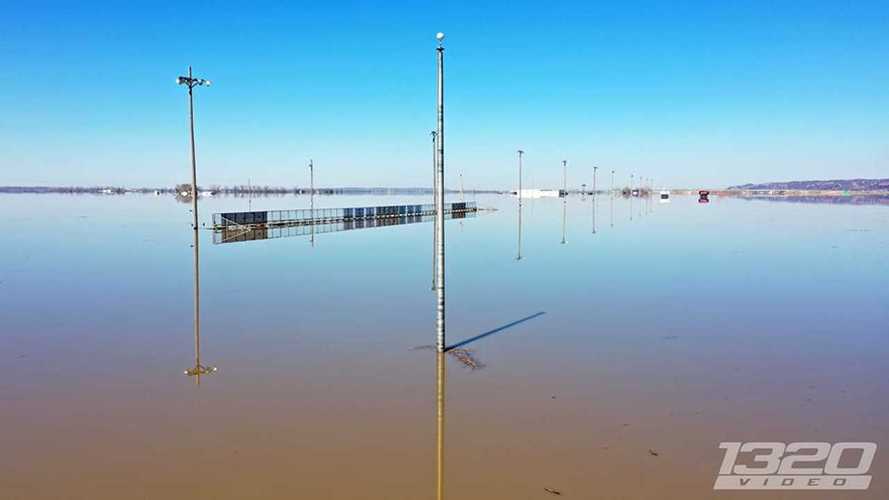 These sad, haunting photos of a flooded race track underscore a national emergency.

Typically, when we hear about race tracks closing, it's a result of financial factors. Oftentimes, they close due to the persistent complaints of dim-witted busybodies who bought McMansions in new subdivisions built close to formerly-secluded tracks. This might be the first time we've heard of a track closing due to environmental reasons.

The Missouri River has flooded, resulting in damage and destruction throughout the Midwest. In Iowa, Raceway Park of the Midlands, also known as I-29 Dragway, is currently under over ten feet of water – and has been for the past week or so.

I-29 Dragway is the home track of 1320Video, and they shared some very sad photos, ostensibly taken with a drone last Sunday, of the track in its current state on their Facebook page. For comparison, they also uploaded some photos of the track, which also includes a 2.23 mile road course, in happier times, to compare before and after. Since the photos were taken, the water level has gradually increased to a whopping 14 feet.

With so much of the timing equipment submerged, substantial repairs will likely be required when the flood waters eventually recede. The track surface, too, will also more than likely be damaged. While the track expects to be able clean up enough to host some cruise-ins and car shows this year, it's probably going to be quite a while – and quite a lot of work – before any more racing will take place.

It's a sad day for the dragstrip, but many thousands of other people have lost their homes and businesses. If these sad, eerie photographs move you to want to do something to help, consider donating to the local United Way. If you're in the area tonight, 1320Video has partnered with local charities to host a charity car show & fundraising drive.