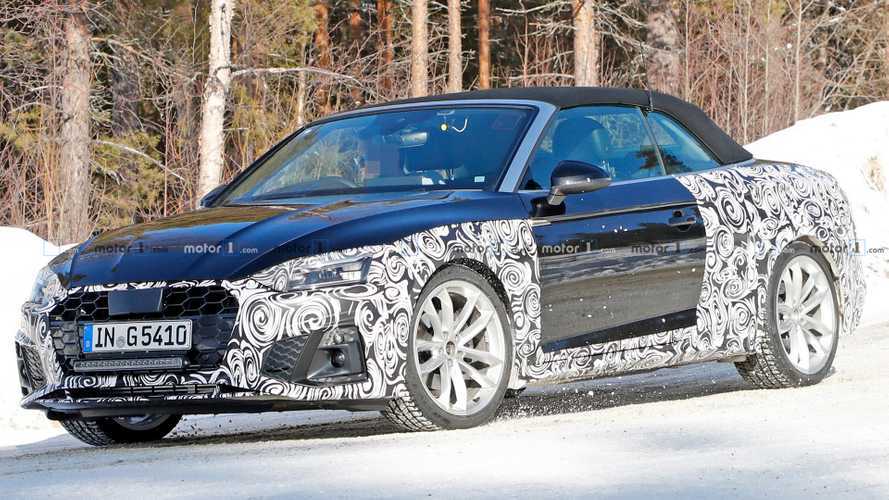 And, unsurprisingly, it's a super minor refresh.

After seeing the refreshed Audi A4 and A5 Sportback out testing on open roads, it’s now time to take a look at the convertible derivative sharing its platform with the aforementioned models. We are talking about the A5 Cabriolet, which is also being prepared for a facelift and has been caught on camera with big parts of its body covered in camouflage foil.

It’s a bit weird to see an open-top vehicle undergoing evaluations in winter conditions but Audi wants to make sure its cabrio can cope with even the most extreme weather conditions. Interestingly, this prototype has an RHD layout and, naturally, rides on winter tires on all four corners.

The partial disguise makes us believe that most of the changes over the model that’s still on sale will be focused at the front, where the A5 Cabriolet will get a revised fascia with a new radiator grille and slightly reshaped headlights. The lighting clusters on this trial car look like full-LED units but we can’t be completely certain until the camouflage is gone.

The improvements will be less notable at the back where the taillights will get revised internal graphics, while the bumper will be slightly more aggressive. There’s probably something happening with the bumper diffuser as well but, again, we will have to wait until the model debuts to confirm that.

This first batch of spy photos with the A5 Cabriolet doesn’t provide a look at the cabin of the convertible, but, just like the A5 Sportback, it appears to feature a tablet-style screen for the infotainment system. This means the display won’t be integrated into the center console like it is on the larger new-gen Audi models. Still, the system will get a serious update and will come with the latest connectivity and infotainment features from the brand.