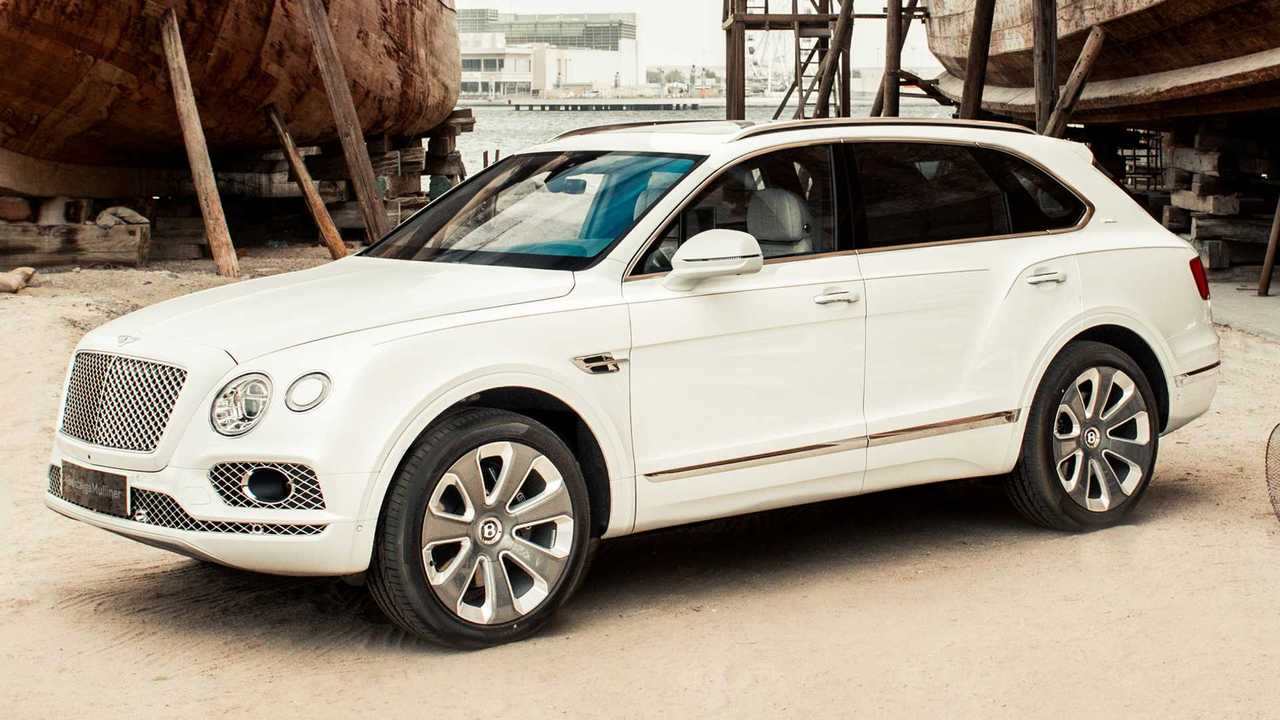 The Pearl of the Gulf is inspired by the Middle East's pearl-diving heritage.

Bentley has revealed a new special-edition Bentayga SUV inspired by pearl diving in the Arabian Gulf.

Originally commissioned by a customer in the Middle East, the Bentayga Mulliner Pearl of the Gulf is handcrafted by Bentley’s Mulliner coachbuilding department. In total, just five examples of the high-powered, high-riding SUV will be built.

Each of the five cars will have a bespoke interior designed to celebrate the pearl diving industry that supported the region for centuries. The Dark Fiddleback Eucalyptus dashboard trim, for example, comes with a dhow boat scene that would once have been a familiar sight to the pearl divers on the waters of the gulf. As an extra nod to the industry, the marquetry dhow is also inlayed with Mother of Pearl.

These Are The Latest Bentayga Versions:

Bentley Bentayga Speed Arrives In Geneva As Fastest SUV Ever

These Bentley Bentaygas Are $268,902 Odes To Art Basel Miami

The seats, meanwhile, are wrapped in linen-coloured hide with secondary trim in a shade of gray called Brunel, which adorns the top of the dashboard and the edge of the steering wheel. In a bid to evoke the colors of pearls, the whole cabin features contrast stitching in grey and brown, while gold thread embroidery also makes an appearance. Topping the lot, the now-familiar Breitling for Bentley clock nestles between the air vents above the touchscreen, featuring mother of pearl on its face.

And because Gulf pearls are among the rarest and most valuable in the world, the Pearl of the Gulf gets special secure storage. Fingerprint sensor technology has been added to an aluminium secure stowage box in the cabin, keeping valuables locked away from prying eyes and light-fingered valet parking staff.

The modifications have been carried out by Mulliner at Bentley’s Crewe headquarters, but underneath the car is still a Bentayga. That means it gets the same styling and the same onboard technology, including the panoramic roof, 21-inch alloy wheels and eight-inch touchscreen infotainment system.

Behind the trademark Bentley grille lies the W12 engine seen in other high-end Bentaygas. Producing 600 bhp, the 6-liter engine gets the massive 4x4 from 0-60 mph in four seconds and on to a top speed of 187 mph (301 kph).

Bentley has not disclosed the asking price for the Bentayga Mulliner Pearl of the Gulf, but the five vehicles are expected to cost significantly more than the standard version.

MILLENNIA OF TRADITION INSPIRES PERSONAL COMMISSION: BENTAYGA PEARL OF THE GULF BY MULLINER

(Crewe, 18 March 2019) Bentley has created the ultimate collector’s model inspired by the Arabian Gulf’s rich pearl diving heritage, with a personal commission for a Middle Eastern customer – the Bentayga Mulliner Pearl of the Gulf.

Just five of these exquisite W12-powered cars will be handbuilt by Mulliner’s craftspeople in Crewe, England, each featuring unique Mother of Pearl and Arabian Gulf-themed motifs.

Each model has a bespoke interior that celebrates the Arabian Gulf’s history of pearl diving, a tradition that dates back millennia and was once the region’s main economic driver. Most notably, intricate marquetry to the Dark Fiddleback Eucalyptus fascia features a pearl diving dhow boat scene, beautifully inlayed with Mother of Pearl.

The luxurious cabin is appointed with Linen main hide and complemented by Brunel secondary hide – a colour scheme inspired by the natural beauty of pearls – with a Mother of Pearl Breitling clock the dashboard centrepiece.

Camel and Brunel contrast stitching is employed for the quilted seats and door inserts, while gold thread embroidery highlights this Bentayga’s pearl diving credentials. Lambswool rugs are also cut in matching Linen, while Mulliner illuminated treadplates welcome passengers in to the cabin.

Gulf pearls are among the rarest and most sought-after in the world, so to help keep valuables safe in the Bentayga Mulliner Pearl of the Gulf, Mulliner has installed an ingenious fingerprint secure storage.

The fingerprint sensor technology has been applied to a high pressure die-cast aluminium secure stowage unit located in the cabin. This discreet and unobtrusive locker creates the ideal place to stow valuables while at the beach or utilising valet parking services.

Treasured Inspiration for a Personal Commission

Archaeologists have evidence to suggest the tradition of natural pearl diving in the Gulf dates back more than 7,000 years. The popularity of pearls spread far and wide during Roman times and were once the most sought after of accessories.

The practise is still considered one of the region’s most treasured traditions and was responsible for the founding of the great coastal cities.

Genuine luxury and go-anywhere driving ability are the hallmarks of the Bentley Bentayga. Powerful, individual and exquisite in equal measure, the Bentayga is for those who demand luxury without compromise.

The Bentayga’s styling is pure Bentley. Sculpted with an elegant, timeless execution, it perfectly balances athleticism with confidence. The world’s most luxurious SUV also has the world’s finest automotive cabin, the epitome of modern British style.

Bentayga offers the widest range of on and off-road drive settings via Bentley’s Drive Dynamic Mode and optional Responsive Off-Road Setting. Up to eight modes are available at the turn of a dial, allowing drivers to select the perfect dynamic set-up for any surface or road condition. This versatility is complemented by Bentley’s Dynamic Ride and Electric Power-Assisted Steering.

Mulliner exists to respond to the requirements of Bentley’s most discerning customers. Any type of personalisation can be undertaken to create a unique Bentley of individual taste – including personal commissions like the Pearl of the Gulf.

Mulliner's roots date back to the 1500s – the firm's original focus was creating luxurious horse-drawn carriages. In 1923 Mulliner showcased work on a Bentley chassis for the first time, exhibiting a two-seater 3 Litre Bentley at the Olympia Show in London – just four years after Bentley Motors was founded. In 1953, Mulliner coachbuilt one of the most iconic Bentleys ever – the R Type Continental. This model inspired the design of today's Continental GT. In 1957, Mulliner introduced the Continental Flying Spur, a special four-door saloon built on the Bentley Continental chassis. Mulliner officially became part of Bentley Motors in 1959, setting up its workshops in Crewe.