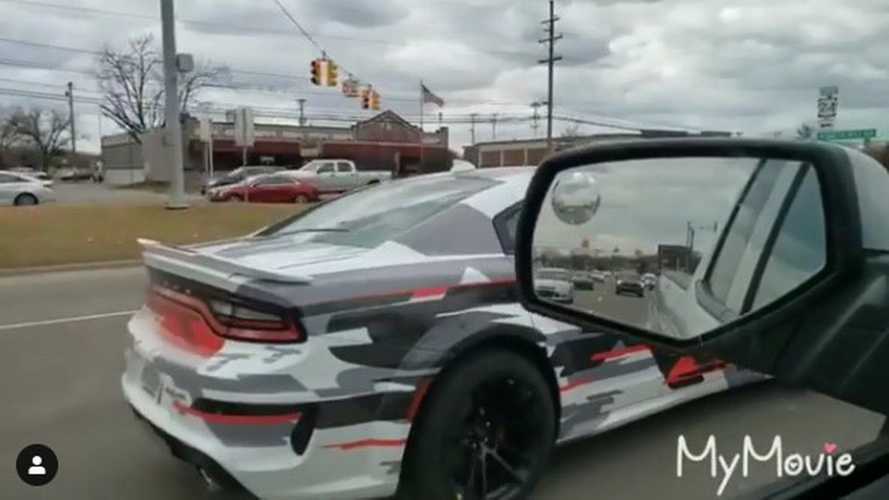 Who said you can't teach an old dog new tricks?

Update: After watching this video more than a few times, we're not quite as sure this is the  Charger SRT Hellcat Widebody. Beyond the unconventional camo job, if this were an official FCA development vehicle, we'd expect it to wear a Michigan manufacturer's license plate rather than a Florida "hard" plate. Still, the car in question looks pretty darn cool, even if it isn't the long-awaited Charger Widebody.

Dodge Charger Widebody Has Debuted And We've Driven It!

We’ve been hearing reports about a possible widebody version of the Dodge Charger for the upcoming 2020 model year and this new short spy video posted on Instagram fuels those rumors. A prototype of the four-door muscle car was spotted the other day out and about in Southfield, Michigan while flaunting its wider hips and a flashy livery to get everyone’s attention.

What we have here is most likely an SRT Hellcat version, but it is believed Dodge will give the R/T Scat Pack model the widebody treatment as well. If we were to rely on the rumor mill, the hotter version of the two widebody Chargers will receive an additional 10 horsepower in the same vein as the 2019 Challenger SRT Hellcat to produce a grand total of 717 hp from the supercharged 6.2-liter V8 engine.

Should that not be enough to quench your thirst for power, a 797-hp Redeye version might arrive further down the line to complement the Challenger SRT Hellcat Redeye. As for the lesser R/T Scat Pack, it’ll soldier on with the 485 hp delivered by the 6.4-liter V8 engine.

We might not have to wait much longer for the official premiere as Dodge could decide to introduce the Charger SRT Hellcat and R/T Scat Pack Widebody sedans as early as Saturday in California at the SoCal LX Club Spring Fest. It’s considered as being the biggest event in the world dedicated to cars riding on the Chrysler LX platform, which dates back to 2004.

Watch The Evolution Of The Dodge Charger