The car is now easier to drive and tune.

Abarth is introducing a heavily revised version of its 124 rally car (based on the Fiat 124 Spider) which will compete in this year’s racing season. The Italian company says it has gathered plenty of data during the first two seasons of the 124 in motorsport “in addition to the practical field experience.” The goal of the 2019 update, Abarth explains, is to deliver customers a generally better car that’s both easier to tune and drive, and “perfect for professional and gentleman drivers alike.”

Powertrain optimizations include a new calibration for the differential with four mappings available of the traction control – high, medium, low grip, and wet. Drivers can select between the modes through a button on the steering wheel and adjust engine torque delivery for better traction according to the conditions. Additionally, the engineers of the company have worked on the gearbox of the car to allow faster gear engagement in acceleration.

Probably the most important novelty of the 124 rally car is the addition of a gravel kit which offers a special setup for use on gravel roads. It increases the ground clearance by 1.57 inches (40 mm) and adds increased suspension travel, as well as new brake discs compatible with 15-inch wheels to reduce the unsprung weight and optimize grip on particularly rough terrain. For comparison, the version of the car for tarmac rides on 18-inch wheels.

This Is The Road-Legal Version: 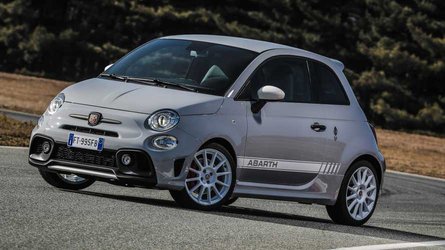 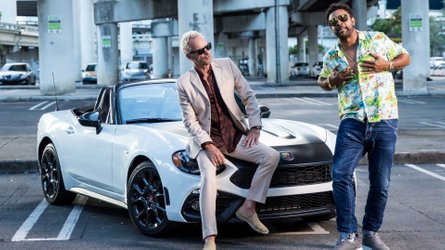 Other improvements include modifications to the engine resulting in a more linear torque curve with more torque available from low speeds. Abarth says this makes driving more effective and simpler, and lets non-professional drivers perform better. Interestingly, no hardware modifications have been done and the improved torque delivery comes from just careful calibrations which promote “smoothness and prompter throttle response.”

Many aspects of the Abarth 124 rally 2019 have been addressed with the objective of bettering the time per kilometre in special stages. This goal was achieved by the Abarth engineers by means of targeted operations on the main mechanical components as well as the engine electronics, the transmission-gearbox and the setup.

Plenty of data was collected during the first two racing seasons of the 124 rally in addition to the practical field experience. The continuous development work carried out by the Abarth engineering team and, last but not least, the major contribution of test driver and pilot Alex Fiorio complemented the experience of the previous two years of racing. A further 5,000 kilometres of simulated tests were clocked up, in addition to the distance already travelled in actual rallies, utilising the same roads where many of the challenging special stages are run.

The goal was to provide customers with a better performing race car, which is simpler to tune and at the same time easier to drive, perfect for professional and gentleman drivers alike, who in the spider seek the typical drifting pleasure of rear-wheel drive cars in rallies, in addition to performance at its best.

Engine - The main job was to improve delivery by means of targeted actions to make torque curve more linear. The torque curve is today fuller at all RPMs, particularly when power from low speeds is needed, which is a typical when coming out of hairpin bends at a low rpm for instance, while making driving more effective and simpler, allowing non-professional drivers to perform at their best. The power delivery improvement is the result of a careful calibration which promotes smoothness and prompter throttle response.

Transmission - The transmission department focused on the differential, with a new locking calibration and four mappings (High/Medium/Low Grip, Wet) on the Traction Control System, which can be quickly selected by the driver on the steering wheel and which adjust engine torque delivery to maximise it according to grip conditions. In this way, the driver can intervene quickly according to their needs by changing the response of the car to the changing grip conditions, fast and precisely, on any terrain.

Gearbox - The gearbox was also targeted to improve manoeuvrability and shifting speed. In particular, the pneumatic actuator was adjusted to allow faster gear engagement in acceleration and more calibrated, smoother downshifting to prevent rear axle locking.

Nevertheless, rear wheel locking, typical of rally driving, is possible by using the hand brake, which is even more effective as a result of the optimised transmission declutching and its subsequent calibrated insertion in traction for prompter take-offs.

Setup - Having a good feeling with the car and being able to adjust the setup is crucial for drivers. For this reason, Abarth worked on all components improving the grip on tarmac and providing a kit for use on gravel roads.

The antidive effect was also revised. The car now has a positive pitching effect while braking which provides better feeling to the driver and facilitates the progressive braking while improving cornering at the same time. All specific aspects were further developed to achieve an optimal overall result, which drivers can also customise to suit their own driving style and the type of course.

Gravel kit - The development work also focused on the car setup for gravel roads by creating a special kit which includes all the components needed for taking on this type of surface. A specific gravel road kit is now available which includes ground clearance increased by 40 mm, with a consequent increase in the suspension travel, needed to maintain constant contact between tyres even on the rougher terrain and for better traction and road holding. The gravel road kit also includes brake discs compatible with specific 15-inch alloy wheel (instead of 18-inch wheels used on tarmac) to reduce the unsprung weight to optimise grip on particularly rough terrain.

The tarmac and gravel tyres are the same size as required by R5 (and WRC) category regulations to be able to take advantage of the wide range of commercially available compounds.