This Cigarette Racing Speedboat With 1,040 HP Could Be Yours 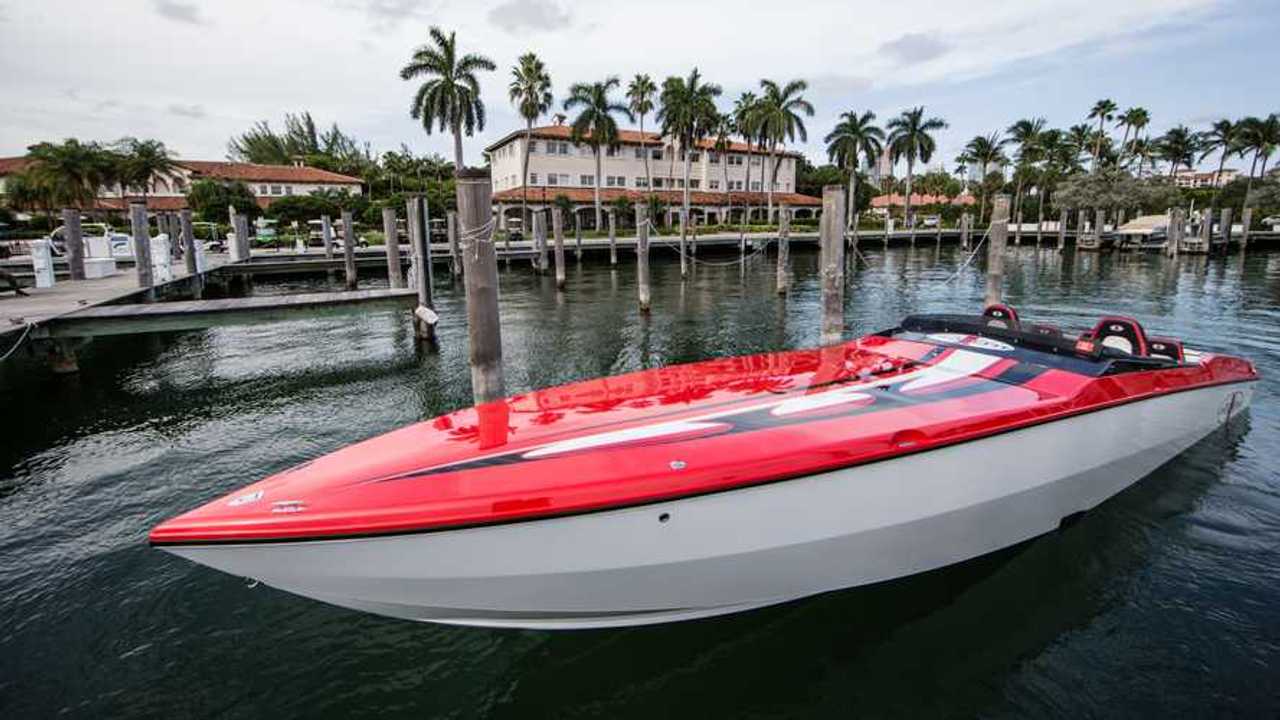 This ain’t no Virginia Slim.

We’re fans of all motor vehicles: be it cars, recreational vehicles, or boats. Mind you, we weren’t always so enamored by the latter. However, a recent ride on the bespoke Cigarette Racing 41-foot AMG Carbon Edition changed our tune. Sixteen-hundred horsepower does that.

Our newfound nautical interests haven’t gone unnoticed, either, and a friend of the site recently invited us to explore his Cigarette Racing 38 Top Gun speedboat. Equipped with a pair of Mercury 520 Racing Engines, which make a total of 1,040 horsepower (775 kilowatts), this boat is capable of reaching a top speed of 80 miles per hour. That’s not just fast, it’s face-numbing fast.

Like a great sports car, Cigarette Racing’s boats are as noted for their looks as they are for their performance, and the 2015 Top Gun is no exception. With a passenger compartment that’s pushed toward the stern of the boat’s nearly 38-foot-long hull and a low-cut windscreen that gently rises from the deck, this red-and-white rocket’s proportions are as striking as those of a Dodge Viper’s.

Arguably there’s no better view than the captain’s, though. Facing a set of gorgeous Livorsi gauges and an 8.0-inch multi-function display from Garmin, the captain is able to keep an eye on vital engine and navigation information from the comfort of a cushy and heavily bolstered seat. With room for four additional passengers and an enclosed cabin below deck, this speedboat is equally adept at comfortably carrying a crew of friends out to sea as it is at blasting about the Atlantic Ocean at high speed.

Just as collector cars tend to spend more time in the garage than on the road, this Top Gun spends more of its time in indoor storage than it does on the water. In fact, with a mere 140 hours on its engines, this Cigarette Racing boat sees an average of 35 hours of use per year. That’s much too low for our friend who truly appreciates the speed and style speedboats offer, so he’s selling the 38 Top Gun in the hopes that its next owner will have the time to use it on a more regular basis. Just as we’re finally appreciating it, too.

With an asking price of $304,995, this Cigarette Racing boat is certainly not a cheap thrill. Still, its seat-of-the-pants performance is as exhilarating as that of supercars costing twice as much. It’s truly intoxicating.