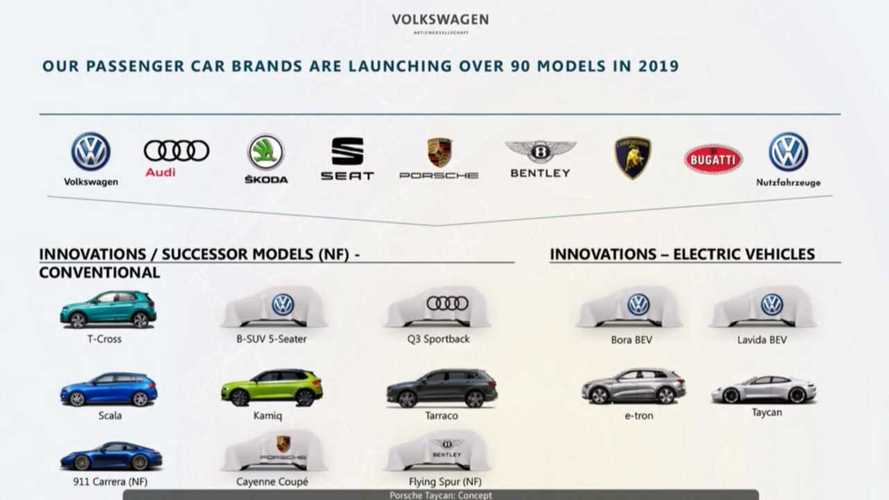 There's also a Q3 Sportback and unnamed five-seat Volkswagen crossover on the way.

During its 2.5-hour long Annual Media Conference took a little time to discuss the upcoming vehicle debuts this year, and the company's graph confirmed the Audi Q3 Sportback, Bentley Flying Spur, Porsche Cayenne Coupe, and an unnamed Volkswagen-badged five-seat crossover as being on the way. In addition, fully electric versions of the Bora and Lavida are on the way, presumably remaining exclusive to the Chinese market. While not in this graphic, the company also confirms that the eighth-generation VW Golf debuts before the end of the year.

Unfortunately, VW's annual conference didn't offer specific details about any of these upcoming vehicles. However, details about many of them have already started leaking out.

For example, Porsche boss of the British market says that the Porsche Cayenne Coupe arrives sometime in March, meaning a debut should be within the next couple of weeks. We are expecting that's mechanically identical to the existing Cayenne but with a revised rear end that provides a sleeker silhouette. Some minor interior styling revisions are possible, too.

The next-gen Bentley Flying Spur arrives with a familiar overall appearance as a big sedan with interior opulence fit for transporting the world's wealthiest people. On the outside, the nose gains styling that takes elements from the look of the latest Continental GT. Spy shots also reveal the company developing a plug-in hybrid version, but it's not clear whether this variant would be available at launch.

The next Golf should look similar to the current one but a longer wheelbase and wider track. There's a massive improvement in technology, though. The cabin includes a digital instrument cluster and a new infotainment system that should largely remove physical buttons from the center stack. Upper trims allegedly even have screens for operating the HVAC and a touchpad for controlling the headlights.