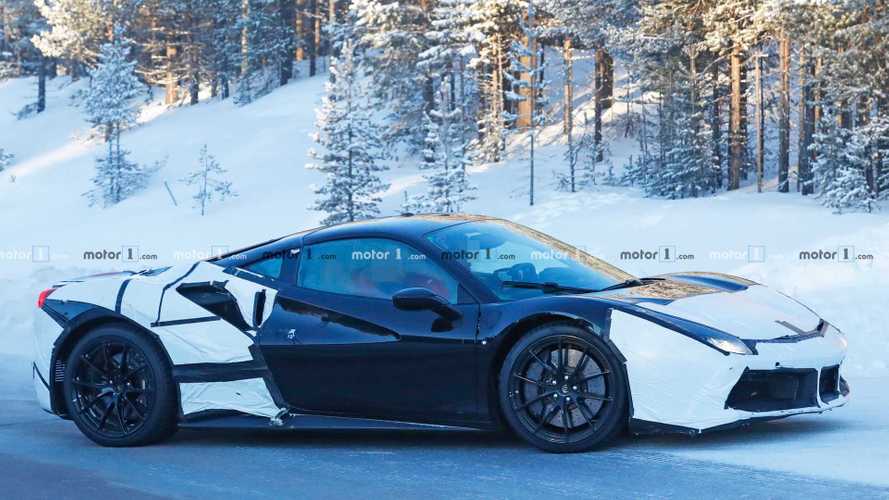 The 2.9-liter twin-turbo V6 from the Alfa Romeo Quadrifoglio models would be the starting point for the electrified powertrain.

Ferrari's much anticipated hybrid V6 will debut in May, according to a rumor from Car, and it'll possibly be available first in a variant of the 488's chassis with the 486 moniker. The electrified layout will reportedly eventually go into several of Ferrari's upcoming models, including the one that will potentially revive the Dino name.

Ferrari prepares to add more electricity to the lineup:

The hybrid V6 will reportedly use the twin-turbo powerplant from the Alfa Romeo Giulia and Stelvio Quadrifoglio models as a starting point. Mechanical tweaks, in addition to the electric motor, will allegedly push the output to around 723 horsepower (539 kilowatts) and 800 pound-feet (1,085 Newton-meters) of torque, according to Car – rather than 505 hp (377 kW) and 443 lb-ft (601 Nm) in the range-topping Alfas. The 2.9-liter engine offers the added advantage of being just under 3.0 liters, which lets it avoid extra taxes in China – a major market for the Prancing Horse.

Spy shots (above) suggest the 486 looks a whole lot like the existing 488 but with revisions to the rear bodywork. The front end would look a little different, too, but not as significantly as at the back.

Ferrari intends to launch four more models in 2019, in addition to the F8 Tributo. One of them is likely the 486, and another might be the smaller sports car that would revive the Dino at least in spirit if not the actual name. A version of the hybrid powertrain would probably be available in this lesser model but possibly with a lower output than the 486.

In addition, Ferrari already confirms that the upcoming Purosangue crossover would also be available as a hybrid, so it might get a version of this electrified V6, too.