Aptly Named BMW 'Death Cart' Is Suicide On Wheels for $2,500 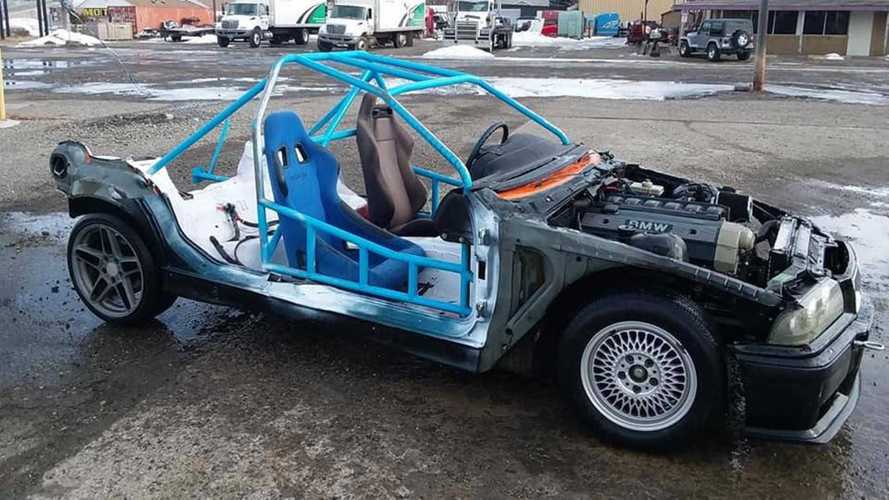 Imagine the fun you could have with this sliced up BMW 3 Series.

Got a lot of land and looking to have some fun? The BMW 3 Series Death Cart for sale on Craigslist in Laurel, Montana, looks like the most fun you legally can have for $2,500. Just don't expect to drive it on the street without doing some wrenching.

Depending on where you look on the ad, the seller says this is a 1995 BMW M3 or 2019 M3. We don't think either is true. The visible parts of the body clearly show this is the e36 generation from the 1990s, not a new vehicle. The lack of M branding on the valve cover indicates that this isn't the performance model, too.

The owner of this weird ride apparently heard that weight was the enemy of speed and took things a little too far. The person removed all of the body panels and welded a roll cage into what remained. There's no hood, and the wheels are partially visible in the engine bay.

The intake manifold appears to be for the e36 BMW 325i with an engine that goes by the internal designation M50B25. However, the owner made many modifications, including an ultra-short intake with a cone-shaped filter attached to it. The powerplant hooks up to a five-speed manual.

The seller reports the DMV "took the title because of the modifications." The lack of taillights alone is enough to keep this thing from being road legal. The person reports having the lamps, in addition to the hood, fenders, and trunk lid. However, reattaching the parts might be more trouble than its worth, since e36 BMWs are fairly inexpensive these days.

The ideal buyer for the seller's self-described "Death cart" would be someone who owns enough space to drive this machine on private land without needing to register it for road use. With a little more work, the new owner could fashion a pickup bed and have a unique farm car. The idea might sound crazy, but it wouldn't be the first 3 Series truck (see above).