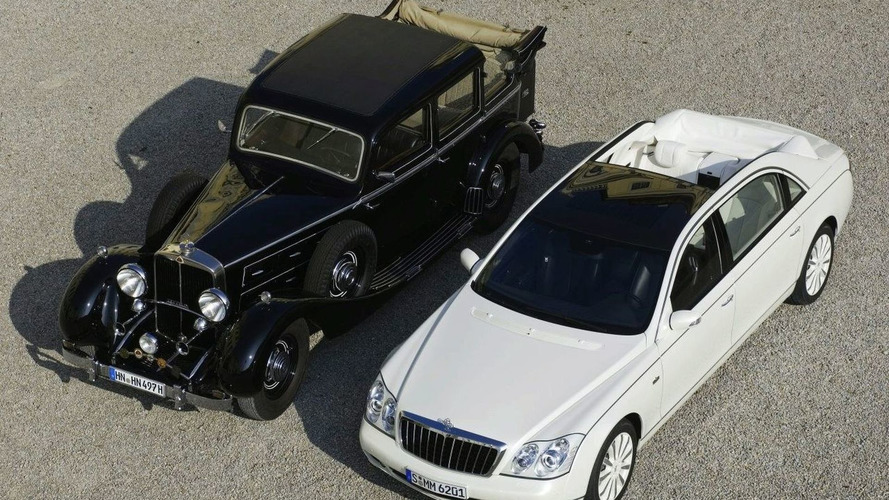 True to the tradition of exclusive landaulets, the roof of this sparkling white one-off study can be opened fully at the rear, while the chauffeur's compartment remains completely enclosed.

After months of speculation, the rumors are finally confirmed about the Maybach 62 S Landaulet concept.  Maybach's concept car, expected to debut at the Dubai Motor Show on November 13, has a very cool rear folding roof, while the driver's compartment remains completely enclosed.

Although there was some speculation that 20 of these would be produced, Maybach is calling its concept a "one off."  Maybach will likely wait to see how much interest is generated from their real clientele before putting the Landaulet into limited production.

Taking just 16 seconds to retract, a switch in the driver's center console triggers the electo-hydraulic roof to fold back behind the rear partition, but not into the trunk.  The driver may also hide the folded roof with a specially fitted leather cover.  Meanwhile, the side walls remain, making it retain the basic shape of a limousine.  Maybach also claims that the interior cabin is completely wind and weather-proof when the roof is sealed.

To keep rear passengers comfortable when the top is down, two newly developed automatic climate control systems control the cabin's weather, even if it is cold and blustery outside.

Its rear section is covered in white leather, white fabric, and white velour, with a choice between black piano lacquer trim, or black granite with gold detailing.  The driver's cabin is all black leather, with black piano lacquer.  A liquid crystal partition separates the front from the back, with rear passengers being able to make the separation opaque at the push of a button.

Rear reclining armchair seats, and an intelligent system to hold glasses, goblets, and a champagne bottle will hopefully help any fool become a Lothario.  Add into the mix a DVD player, six CD-changer, and cooler, and you wind up with one hell of a nice way to get home from the airport.

LINGUATRONIC voice control is included, but we're not sure how well you will be heard when you ride with the top down, blaring Busta Rhymes.

Riding on ellectronic air suspension, the Landaulet concept has a shiny Antiqua White exterior, with newly designed white 20-inch wheels.  The car's suspension comes from an AIRMATIC DC, and an Adaptive Damping System, to provide what Maybach claims to be a comfortable and stable ride.  Twin callipers in the front, and internally ventilated disc brakes all around, the braking system is comprised of five different components, all developed at Mercedes-Benz.

The Maybach 62 S Landaulet is the kind of car, that inspires you to yell out, "That's it, baby, when you've got it, flaunt it, flaunt it!"