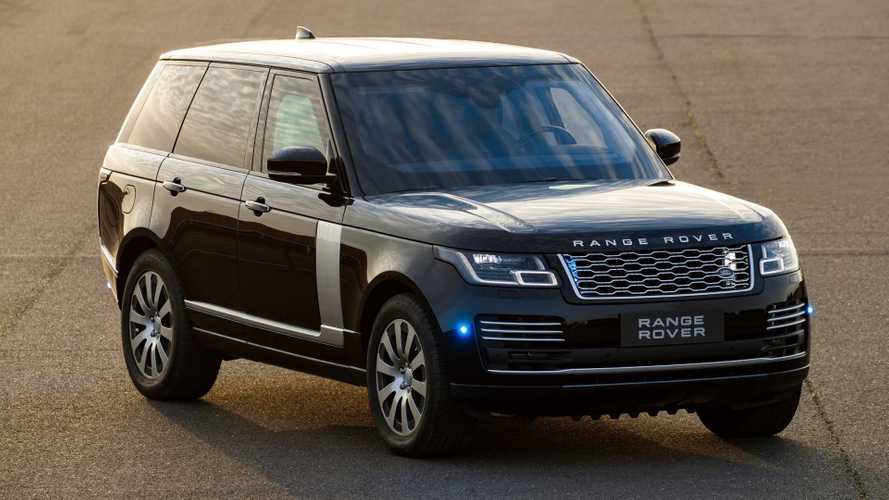 The armored Range Rover has been upgraded to a supercharged V8 engine.

It might look just about the same as the regular Range Rover, but look closer and you’ll notice some things are a bit different compared to the standard variant of the British luxury SUV. Take for example the LED lights in the front bumper and behind the grille, although it’s the thickness of the doors that really gives away the model’s true identity. We’re in fact dealing with the Sentinel, the armored version of the big Range Rover, featuring more than one ton (2,204 pounds) of armor plate and glass to protect the occupants from a terrorist attack.

Land Rover’s Special Vehicle Operations very first armored vehicle, the Sentinel made its debut back in September 2015 with a supercharged 3.0-liter V6 engine. For 2019, SVO is making some changes underneath the hood where now resides the larger 5.0-liter V8 mill, also of the supercharged variety. The engine upgrade comes along with an extra 39 horsepower for a grand total of 375 hp.

It’s enough supercharged muscle for a sprint to 62 mph (100 kph) completed in 10.4 seconds and a limited top speed of 120 mph (193 kph), which might not sound all that impressive, but let’s keep in mind the Sentinel probably weighs more than the moon.

This armored version of the Range Rover has the suspension, chassis, braking, and the electronic stability systems recalibrated for the SUV’s extra weight, while the bespoke wheels come with a built-in run-flat system. This allows the vehicle to cover up to 30 miles (50 kilometers) at speeds of 50 mph (80 kph) even if one of the tires is punctured.

Have you seen these armored cars yet?

The 2019 Sentinel can be optionally fitted with a siren and emergency lighting packages, as well as a custom front window that goes down by 150 mm (nearly six inches) for document delivery. Inside, there’s more headroom than before and better seats, along with the company’s latest and greatest Touch Pro Duo infotainment system.

Land Rover will have the updated Sentinel on display starting today, but not at the Geneva Motor Show since JLR is skipping the event altogether. Instead, the armored SUV will be exhibited until Thursday at the Home Office Security and Policing show in the U.K.

Designed and engineered by Land Rover Special Vehicle Operations, and built at the SV Technical Centre in Warwickshire, the armoured Sentinel provides peerless occupant security with world class comfort. At its core is a protection cell built to stringent whole vehicle standards and in accordance with full ballistic and blast certification*. The enhanced body is engineered to face modern and unconventional forms of attack, including improvised explosive device (IED) fragmentation blasts.

The Range Rover Sentinel delivers the exceptional protection and security required by our VIP clients without compromising the superior refinement of the latest Range Rover. The addition of the more powerful 5.0-litre Supercharged V8 engine and a redesigned interior ensures a heightened level of performance and occupant safety

The chassis, suspension, braking and electronic stability systems are all optimised to retain Range Rover’s on-road dynamics, while Sentinel also delivers unparalleled off-road ability for an armoured vehicle of this kind, enabling it to tackle deep water crossings and challenging terrain with ease. Specially manufactured wheels incorporate a run-flat system so the vehicle can be driven over distances of more than 50km (up to 30 miles) at speeds of 80km/h (50mph) if a tyre is damaged.

Sentinel is fitted with armoured glass in order to help protect occupants from attack. Further security systems includes the option for a specially configured front window which drops a maximum of 150mm for document delivery, while it also features a public address system allowing occupants to address people outside the vehicle without leaving their secure environment. Siren and emergency lighting packs are also available.

Featuring the latest Range Rover exterior design elements, including LED lighting, Sentinel is now offered with the optional Black Pack which adds black finishes to trim items for an even more sophisticated appearance.

The updated Range Rover Sentinel will make its debut at the Home Office Security and Policing show from 5-7 March 2019, at Farnborough International Exhibition and Conference Centre.