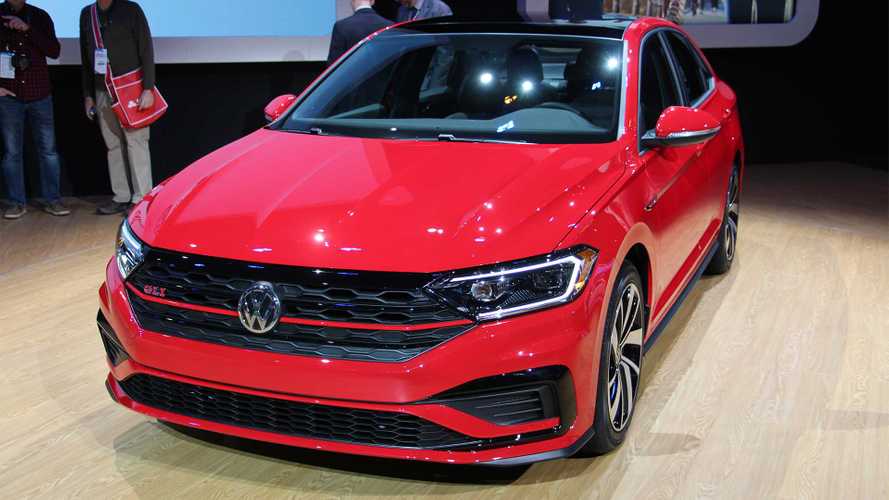 If you want more features, the 35th Anniversary and Autobahn trim levels are also available.

The 2019 Volkswagen Jetta GLI goes on sale in the United States this spring for a starting price of $25,995, plus an additional $895 destination fee for all trims. Buyers looking for more amenities can opt for the 35th Anniversary Edition with a starting price of $26,995 or the range-topping Autobahn for $29,195.

All three GLI trims come with a 2.0-liter turbocharged four-cylinder producing 228 horsepower (170 kilowatts) and 258 pound-feet (350 Newton-meters) of torque. The models come standard with a six-speed manual transmission, but a seven-speed dual-clutch gearbox is also available for an additional $800 on the three grades.

Even the base S trim has amenities like full LED headlights and driver assistance tech like forward collision warning, autonomous emergency braking, blind spot monitor, and rear traffic alert. The GLI rides on a suspension that is 0.6 inches (15.2 millimeters) lower than the regular Jetta. The front has a black honeycomb grille with red accents. The rear features a spoiler, diffuser, and two chrome exhaust tips. Inside, there are heated seats, dual-zone automatic climate control, and 6.5-inch infotainment screen.

The 35th Anniversary Edition dresses up the exterior by adding a black roof, mirror caps, and rear spoiler. The model rides on 18-inch wheels with a dark gray finish and red accent around the rim. Adaptive dampers are also standard on this grade.

Sixth generation of Volkswagen’s performance sedan has the heart and soul of the GTI with unique styling, sharper handling, more power than ever before, and more standard features

The 2019 GLI is powered by the 2.0-liter turbocharged and direct-injection EA888 TSI® engine, making 228 horsepower (achieved with premium fuel) and 258 pound-feet of torque, 18 more horsepower and 41 lb-ft more than the previous GLI model. This engine, shared with the Golf GTI, features variable valve timing on the intake and exhaust sides, as well as variable exhaust valve lift.

The power is taken to the front wheels via a standard six-speed manual transmission, with an available seven-speed DSG® dual-clutch automatic transmission. Automatic transmission models come standard with a Start/Stop system designed to help improve fuel efficiency. This technology stops the engine during idle when the brake pedal is held (such as when waiting at a stop light). When the brake pedal is released, the engine restarts. EPA-estimated fuel economy for the GLI is 25/32/28 mpg (city/highway/combined) regardless of transmission choice.

The Jetta GLI features an all-around independent sport suspension, with a strut-type setup at the front and a multi-link arrangement at the rear. The front brakes are shared with the Golf GTI and Golf R, using 13.4-inch diameter vented discs. Like the GTI, the GLI is fitted as standard with the VAQ electronically controlled, torque-sensing limited-slip differential that helps to eliminate understeer, as well as variable ratio electric power-assisted steering. A 35th Anniversary model is also fitted with the DCC® adaptive damping system.

The 2019 Jetta GLI model will come with the People First Warranty, America’s Best Bumper-to-Bumper Limited Warranty. The warranty provides coverage for six-years or 72,000-miles (whichever occurs first), and can be transferred to a subsequent owner throughout the remainder of its duration.

The 2019 Volkswagen Jetta GLI will be available in two regular trim levels—S and Autobahn—and a 35th Anniversary Edition. It is expected to begin arriving at U.S. Volkswagen dealers in the Spring of 2019.

Destination fee on all models is $895.