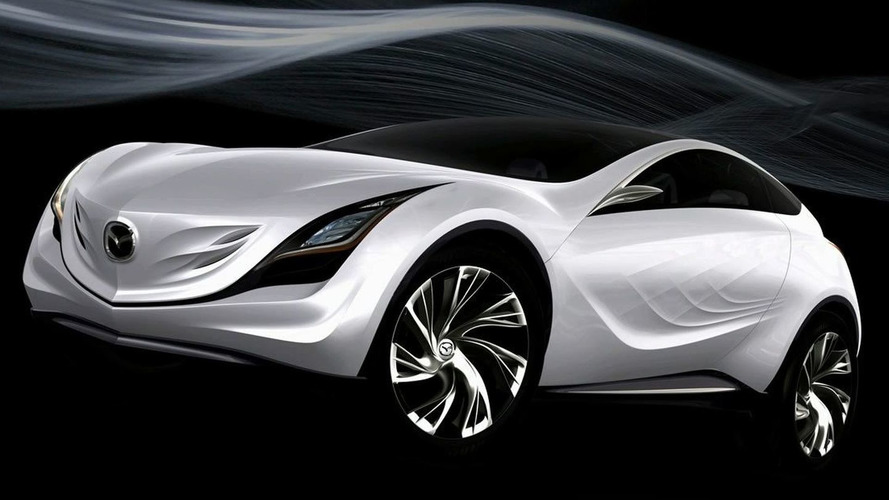 Yesterday at the Moscow Motor Show, Mazda unveiled its latest concept – the Kazamai Crossover. It is the result of Mazda's Nagare design language and Sustainable Zoom-Zoom projects blended into one model.

Yesterday at the Moscow Motor Show, Mazda unveiled its latest concept – the Kazamai Crossover. It is the result of Mazda's Nagare design language and Sustainable Zoom-Zoom projects blended into one model and it previews a model Mazda intends to produce in the not too distant future – possibly the next generation CX-7.

Kazamai means “swirling crosswinds” in Japanese and it powerfully expresses the character of the vehicle, it is slightly larger than the current Mazda3 with a width of 1,930 mm and a length of 4,520 mm which not only gives it ample room for a small SUV but tells us Mazda are planning to use the same platform for both vehicles in the future.

The exterior has been designed to be both lightweight and aerodynamic, the latter being achieved through a flat floor panel, a rear diffuser, and a low roof line. The aim is to make the Kazamai’s aerodynamics at least 10% better than other vehicles in its class.

Engineers are currently developing a 2.0-litre direct-injection petrol engine which Mazda state will suit perfectly for the Kazamai, it will feature Direct Injection Spark Ignition (DISI) and offer a 30% improvement on fuel economy. The power unit will be mated to a six-speed automatic transmission that is also under development and the power will be passed to all four wheels via its four-wheel-drive system.

Why Moscow you may ask? Russia is only just behind Germany as Europe's biggest market and considering it is also the fastest growing market it is likely to move into first place by next year – possibly even this year. The answer is further demonstrated by the fact Mazda's sales have increased from 8,565 units in 2004 to over 50,000, that's an increase of 500%. Mark our words when we say the Moscow will soon host one of the biggest autoshows in the world.