The S3 has a sharp-edged grille and dual exhaust outlets at each corner of the rear.

New generations of the Audi A3 and S3 are on the way, and this fresh batch of spy shots catch them testing together. The photos provide a fantastic opportunity to compare them. 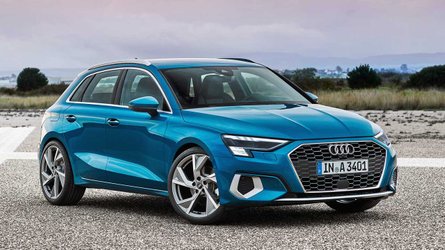 The next-gen A3 wears sharper styling that includes pointier elements for the edges of the grille and shape of the headlights. The situation is largely similar at the rear where the taillights have a more jagged appearance. The Four Rings only plans to offer the A3 as a five-door model because there's not enough market interest in the three-door.

Earlier spy shots offer a glimpse inside the A3's cabin. The model features a touchscreen that integrates into the center console, and there's a second digital display below it for controlling the HVAC system. The Virtual Cockpit digital instrument screen also carries over from other Audis.

In comparison to the A3, the S3 looks a lot meaner. The designers give the grille surround an even sharper shape, and the intakes in the lower fascia are larger. Looking at the back, there are dual exhaust outlets at each corner, rather than hiding the pipes behind the rear fascia on the standard model.

The A3 hatchback will debut in Europe in 2019 and will be on sale before the end of the year. The five-door won't be available in the United States. Instead, Americans will have to wait until the sedan variant's eventual arrival.

The S3 likely won't have an unveiling until sometime in 2020, and Europeans will be able to buy one before the end of that year. Again, Americans will have to wait for the sedan version before they'll get a taste of the extra power.