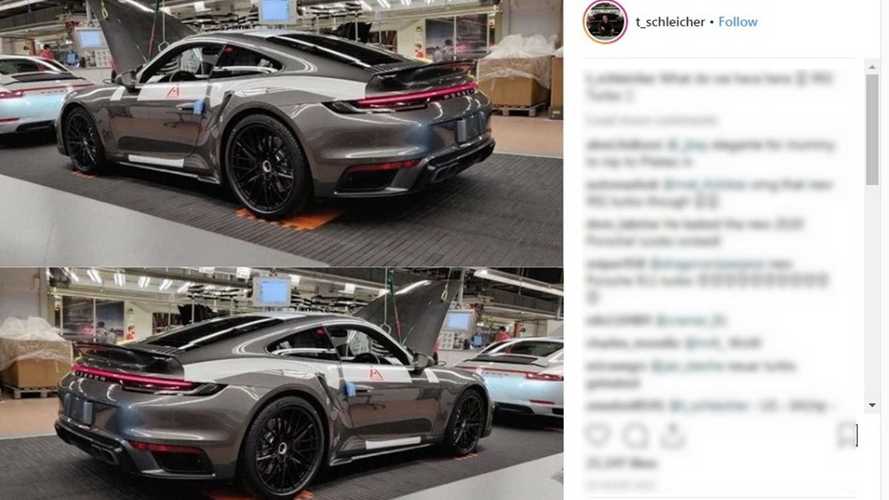 It appears the sports car was photographed straight on the factory floor.

Well, well, well. What do we have here? Having seen the 992-gen Porsche 911 Carrera S/4S, we’re slowly but surely turning our attention towards the hotter versions of the timeless Nine Eleven. One of them is obviously the new Turbo due to go official later this year, but as you can see, the cat is pretty much out of the bag.

Instagram user and Porsche aficionado Todd Schleicher published a hugely revealing two-in-one image of the new beast, which appears to be resting straight on the factory floor in Zuffenhausen, Germany. Upon a closer inspection, we realize these aren’t two images per se, since the one below is merely a mirrored version of the upper photo – see the reversed “Porsche” lettering at the back and the “right-hand-drive” layout of the below image?

Still carrying the safety wrap to protect the precious bodywork and the gray metallic paint, the new Turbo had the frunk open and was most likely going through a final inspection. It’s a Turbo all right, just look at the square quad exhaust tips and the more menacing body. Overall, it’s exactly how we would’ve imagined the 911 Turbo (992) since Porsche obviously prefers going down the evolutionary route when it comes to the design of its core sports car that has been around for decades.

When Porsche will officially take the wraps off the new Turbo, expect power to come from a beefier version of the familiar 3.8-liter, twin-turbo six-cylinder engine generating more oomph than the 540 hp and 487 lb-ft (660 Nm) available in the 991.2 911 Turbo. Output will be channeled to the road most likely through the new eight-speed dual-clutch automatic transmission.

This major leak could be a sign Porsche has plans to introduce the new 911 Turbo as early as March at the Geneva Motor Show. If not, we will probably see it in September in Frankfurt.