The Life OD crew, hailing from the Pacific Northwest, is known for two things: getting sideways in a hurry, and possessing an unquenchable thirst for knowledge. Last time we caught up with them, they were seeing what would happen if you installed over two feet of wheel spacers on a car. This time, they're attempting the ultimate engine swap: a Harbor Freight lawnmower engine.

After yanking the stock engine out of an early 2000s Mazda Protege, the team set to work cleaning up the engine bay to prepare for welding and fabrication. Then, they made a pilgrimage to their local Harbor Freight to do some engine shopping. 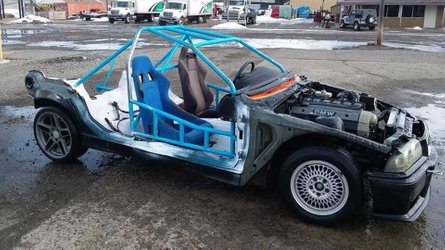 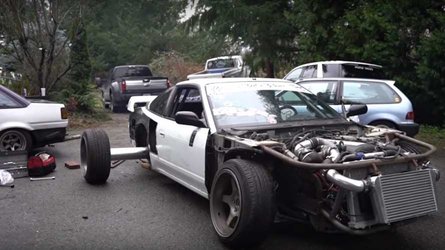 How Many Wheel Spacers Can You Fit On A Nissan 240SX?

Harbor Freight offers several flavors of small, single-cylinder air-cooled engines. These can be used to power anything from a minibike or go-kart to a lawnmower or log splitter. Settling on one of the larger options, a Predator 420cc, the team went back to the shop to make arrangements for fitting the engine to their hapless Mazda.

The Predator 420cc produces 13 horsepower and almost, but not quite, 20 ft/lbs of torque. The motor's output shaft was drilled out, allowing it to slide over the input shaft for the Mazda's automatic transmission. Then, the shafts were welded together. A custom motor mount was made from some scrap metal.

Surprisingly, the little engine that could actually propelled the Protege to street-legal speeds, even managing to climb a hill with three adults inside. The triumphant joy seen in their faces is usually reserved for podium finishers at Le Mans, Daytona 500 winners, and world champions. In our opinion, their jubilation was entirely justified.

Personally, we'd like to see some additional development on this concept, with the throttle control moved inside the cockpit, and a clever spot for the pull-start. While it's not the optimal choice for high-performance, it's likely that this engine swap has resulted in the most fun anyone has ever had with 13 horsepower.