Bandit Trans Am Jump At Autorama Nixed Over Confederate Flag 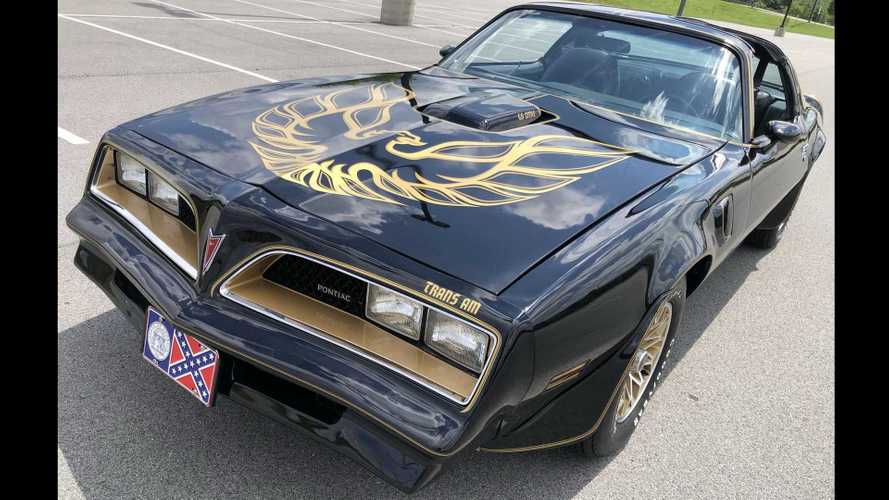 The Detroit City Council allegedly rejected the stunt request because of the car's license plate.

Those steeped in the world of custom cars know all about Autorama. For decades, this Detroit-based hot rod show has been the Holy Grail of builders across the United States, if not the entire world.  Occasionally a super-cool stunt is staged outside to kick it all off, and such a plan was in place this year to honor the passing of Hollywood actor and Smokey and the Bandit star Burt Reynolds.

The plan was to recreate the memorable bridge jump scene with a screen-accurate black-and-gold Pontiac Firebird Trans-Am, but apparently, the car was too screen accurate for the Detroit City Council.  According to the Detroit Free Press, the council rejected the jump by a 7-1 vote because of the iconic car’s front license plate, which features a Confederate flag like the one used in the 1977 blockbuster film.

They Called Him The Bandit:

Curiously, that didn’t phase council members in 2017. An orange Dodge Charger kicked off the show that year with a stunt jump, and it wasn't just any Charger. It was a classic 1969 Charger painted up to match the General Lee from The Dukes of Hazzard – perhaps the only other American car to match the Bandit’s Trans Am in terms of iconic Hollywood vehicular stardom. We mention this because the General Lee features a Confederate flag painted on the roof, which is far larger than the roughly 12-inch wide Confederate flag license plate that adorns the front of the Trans Am.

For those outside the United States who may not be aware, there’s been some controversy in recent years over displaying the Confederate flag and what it stands for. Some feel it’s a symbol of rebellion, while others see it as a symbol of racism and hatred from a dark time in America’s past. There’s certainly truth to both assessments, and some could argue that context also matters in where and how it's displayed. In any case, it seems Detroit City Council members feel it’s enough of an issue to deny the request for the jump to happen.

Find Out How The Jaguar E-Pace's Barrel Roll Was Achieved

Perhaps lost in this controversy are the absolutely stunning machines that come to Detroit’s Cobo Center – the same venue that hosts the North American International Auto Show – every winter. Far from being just another car show, Autorama entries range from merely wild to incredibly insane, with levels of detail and craftsmanship unlike anything else in the world. The show’s coveted Ridler Award is the automotive equivalent of winning an Oscar or Grammy, and it’s often a life-changing experience for builders who take one home.

2019 marks the 67th year for the prestigious show. Upwards of 800 cars are expected to be on hand and it all starts on March 1, with or without the Bandit’s airborne Trans Am.