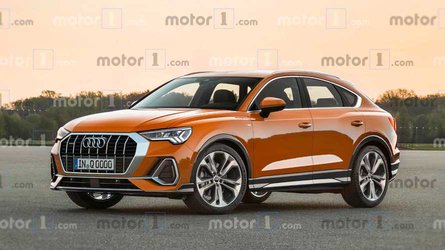 Audi Sport has made it crystal clear it wants to diversify the RS portfolio and this expansion has already started if we take into account the RS5 Sportback launched last year. That being said, the focus of Ingolstadt’s go-faster division is actually on boosting the number of RS-badged crossovers, with RS Q5 and RS Q8 models on the agenda. We won’t be too surprised if there will also be an RS Q7, and today we can bring you the first batch of spy shots depicting yet another high-riding RS model. 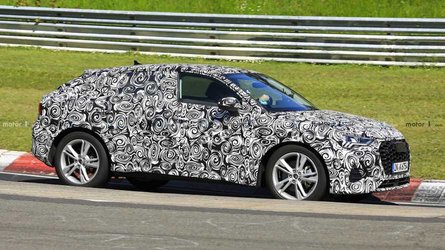 Even though the regular Q4 hasn’t even been introduced yet, Audi Sport has been caught out and about testing the hotter RS Q4. Despite the fact it is wearing camouflage on 99 percent of its unusual crossover-coupe body, the wheel arches are a bit exposed to reveal the prototype is painted in what appears to be Lime Green.

How do we know it’s the RS derivative? Have a look at the back of the Audi test vehicle where the dual oval exhaust tips obviously indicate this isn’t an ordinary Q4. The front bumper with its massive air intakes is another clue betraying the model’s true identity, and so are the beefy brakes with front calipers adorned with the “Audi Sport” logo.

Much like the RS Q3 we spotted at the beginning of the year, the RS Q4 will make use of a turbocharged 2.5-liter inline-five engine. The nine-time-consecutive winner of the International Engine of the Year Award will pack a little more power than what you get in the current RS3 and TT RS models, with a report indicating output will be bumped from 400 to roughly 414 horsepower.

We will have to wait for the Q4 RS to show its production metal as it certainly won’t be out this year. Audi plans to unveil the regular version of the compact crossover in the months to come, so a best-case scenario for the RS model’s launch would be sometime in 2020.