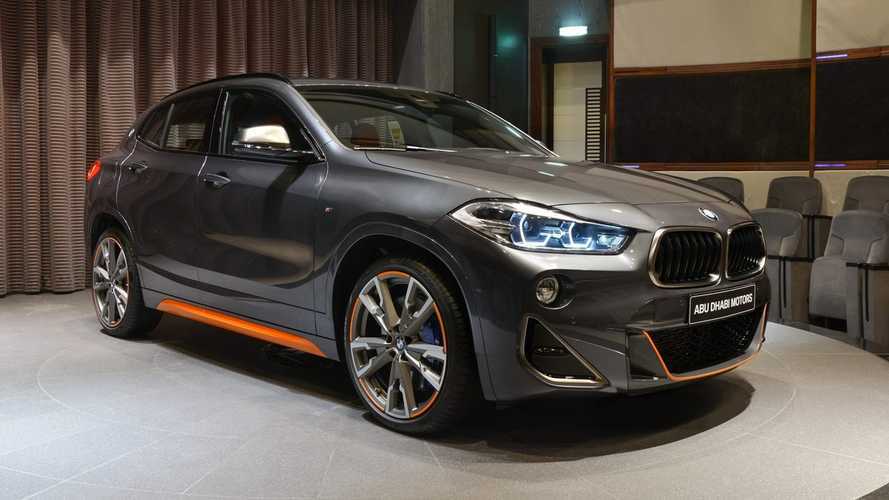 Orange you glad BMW offers such a high level of customization?

BMW has ruled out the idea of introducing a fully fledged M version of a front-wheel-drive-based model, and while the X2 M35i is only an M Performance model, it still has the most powerful four-cylinder engine ever installed in a Bimmer. Deliveries to customers are scheduled to kick off next month in Europe, while over in the United Arab Emirates, the famous BMW Abu Dhabi dealer just took delivery of a high-spec version.

Finished in a shade called Mineral Grey, the X1 crossover’s fancier sibling rides on 20-inch lightweight wheels finished in Cerium Gray to complement the swoopy and relatively tall body. What sets this X2 M35i apart are the not-so-subtle orange accents we weren’t expecting to see on a predominantly gray vehicle. These are noticeable not just on the body, but also on the M-branded alloys to contrast the blue brake calipers adorned with the “M” logo hiding behind.

Those orange stripes on the lower front grille, side sills, and on the rear diffuser have a correspondent inside the crossover’s cabin where the leather upholstery has a similar finish. Not only that, but the door cards are partially finished in orange, much like the lower section of the dashboard and most of the center console. Even the central armrest has that vibrant color, and it would be interesting to see how it will withstand the test of time after several years of heavy use.

Flashy spec aside, this X2 rides lower to the ground thanks to its M Sport suspension tailored to the M35i variant. xDrive comes as standard on the range topper, and so does launch control enabling the potent compact crossover to hit 62 mph (100 kph) in just 4.9 seconds thanks to 302 horsepower and especially due to the generous torque of 332 pound-feet (450 Newton-meters).

As a refresher, the BMW X2 kicks off at $36,400 in the United States, but the M35i costs an additional $10,050, and that’s before you begin to tick the options boxes of the configurator.

Discover all there is to know about the hottest X2: