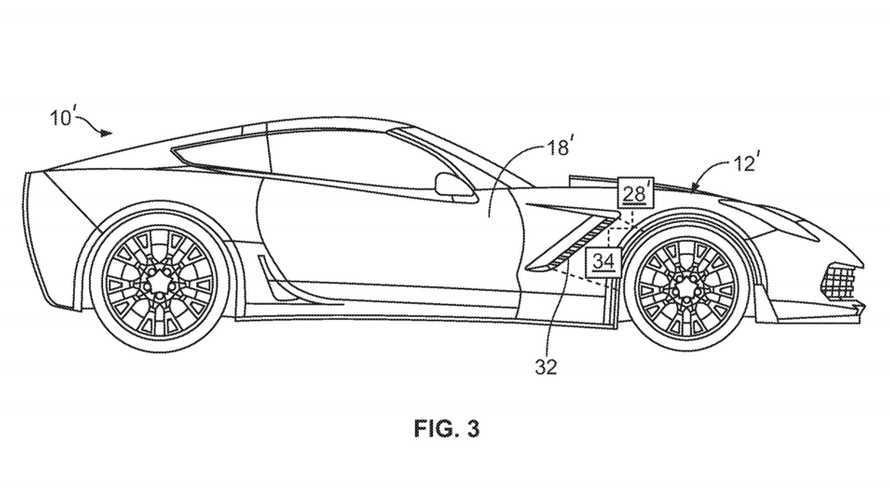 The active aerodynamic elements could help cornering and braking.

General Motors has filed a patent application for a new take on active aero technology that shifts the movable elements to a vertical orientation along the sides of a vehicle instead of the more conventional horizontal wings. Making this idea even more intriguing, the automaker uses a Chevrolet C7 Corvette to illustrate the plan. Maybe this is a system that could show up on a 'Vette in the future.

GM's main idea in this patent is using the side-mounted flaps to improve turning and braking inputs. When turning, sensors would monitor the steering wheel and the vehicle speed. At certain thresholds, one of the active elements would deploy. When this happens, there's a pressure differential between the two sides of the vehicle, which puts a force on the body to add extra assistance for cornering.

The system's use for slowing down is similar to the airbrake on many supercars like the McLaren 720S. Onboard sensors would monitor for hard braking inputs. When it senses one, then both flaps would deploy, and the extra drag would help slow the vehicle.

In addition to using the flaps, GM's patent application describes a few other ways that this tech could work. One of the more interesting options is using vents with active shutters on each side of the vehicle that would open to release heat from the engine or brakes. This creates a difference in air density that results in a force on the body to aid in turning.

Last year, GM applied for another patent for a variety of active aerodynamic elements. The associated image (above) shows a variety of movable elements at the front and rear. The filing describes that sensors would monitor longitudinal and latitudinal forces on the tires and make the necessary adjustments.

Remember that just because a company files a patent doesn't mean that the tech is coming to the road. In some cases, the application is just a way to keep other companies from using similar systems.