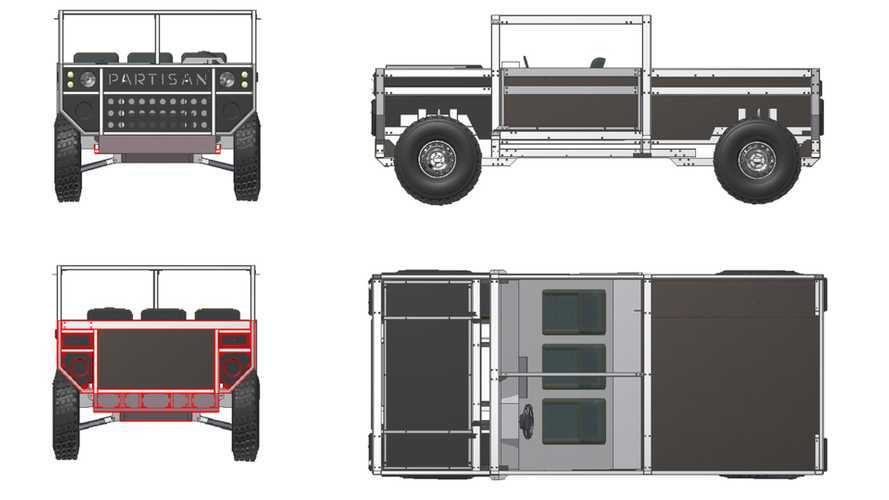 The weird boxy vehicle is available in multiple lengths, in addition to a choice of SUV and pickup body styles.

Partisan Motors is back, and this time the German brand aims to enter the highly specialized market for mining vehicles. The new Partisan Maulwurf (the German word for mole) isn't a single machine but instead a family of modular models for carrying miners in either open pit or underground operations.

After showing off the military-focused Partisan One in 2017, a German mining company allegedly got in touch with Partisan and asked the automaker for a version capable of operating underground in potash mines. The result of this proposal is a series of vehicles that are simple and easily maintainable for working in harsh conditions.

Currently, Partisan imagines the Maulwurf in five forms. There are three SUVs: three-door Kurz, five-door Lang, and seven-door Jumbo. In addition, the company could build single- or double-cab pickups that the firm calls the Cargo.

Partisan used the One as a starting point but incorporated a new electric powertrain with separate motors powering each wheel. The double floor sandwiches the batteries, and there's a turbocharged engine under the hood that acts as a generator specifically for charging the cells if a plug isn't nearby. An air suspension provides a smooth ride and height adjustments while driving through the mine.

The exterior uses the same construction philosophy as the One by bolting steel body panels over a stainless steel tubular frame. The result isn't beautiful, but Partisan says the layout offers the advantage of being able to swap out the pieces easily.

Partisan's last creation was the Kremlin, and the company thought it should be in Vladimir Putin's motorcade. The vehicle looked largely identical to the earlier One but with an extra set of doors.

PARTISAN MOTORS presented the PARTISAN MAULWURF family of off-road vehicles for use in mines and quarries.

PARTISAN MOTORS, on the basis of the PARTISAN PLATFORM modular vehicle system developed by its specialists, presented a whole series of PARTISAN MAULWURF vehicles, which are ideally suited for use as the main vehicle for transporting personnel and materials in the toughest mining conditions (opencast and underground).

Features of the PARTISAN MAULWURF series:

- The robust chassis of the vehicle provides exceptional mobility, flotation and durability with an optimum power-to-weight ratio.

- Universal design options cover all the needs of the mining industry

In 2017, Partisan Motors, represented by its founding father Yuri Postnikov, presented a prototype of the PARTISAN ONE model. The off-road vehicle aroused a flurry of interest around the world, and publications about it were published on the websites of all prominent automotive and business Internet resources. After that, Mr. Postnikov was approached by specialists of one of the German mining companies with a proposal to study the possibility of creating a car for their needs on the basis of PARTISAN ONE. This development was the prerequisite for the development of a range of electric vehicles for deep earth work in potash mines, which perfectly match their purpose and the most difficult operating conditions.

The use of a vehicle to transport personnel in potash mines imposes very serious requirements on its design, passability, reliability, cleanliness of exhaust and maintainability. The vehicle must be very spacious and, at the same time, maneuverable in narrow underground corridors, confidently overcome slopes and ascents up to 45%, have large wheels for smooth movement on the rocky surface, have a strong spatial protection of passengers, be extremely reliable and repairable in dungeon conditions. A special requirement is the cleanliness of the exhaust, and best of all, the total absence of such a requirement, in order to reduce the cost of ventilation of the mine and increase the number of vehicles for the transportation of personnel in the vast underground spaces, comparable, both in size and length of roads, with the large Western European city.

It is this very serious task that PARTISAN MOTORS has been able to meet. On the basis of the PARTISAN PLATFORM modular vehicle system we have developed, the entire PARTISAN MAULWURF family of vehicles can be fully prepared and put into production within a short period of time for use as passenger transport or material transport in the mining industry (open and underground).

For this purpose, PARTISAN MOTORS has developed a fully electric version of the PARTISAN MAULWURF with a quick-assembling body made of high-strength steel, stainless steel profiles with a closed rectangular cross section. The interior of the double floor is filled with electric batteries that supply the motors. Under the hood is a self-contained unit with a turbo-generator for charging the on-board batteries.

Each wheel is driven by its own powerful electric motor, which eliminates many heavy and bulky mechanisms such as gearboxes, dispensers, cardan shafts, reduces weight and dramatically increases the reliability, durability and maintainability of the vehicle. Thus, the car even at the maximum load is capable to have acceleration dynamics of a sports supercar.

The design features with a spatial load-bearing frame made of stainless steel profiles of a closed section allow for the realization of an almost busy inner space of the SUV, the maximum possible protection of the crew, and an absolutely flat floor without a protruding tunnel in the middle provides easy access and movement of fully equipped miners inside the vehicle.

The impressive design of the independent air suspension on the transverse levers ensures high smooth running, speed and manoeuvrability, and allows for a wide range of ground clearance adjustment.

The long service life and durability of the PARTISAN MAULWURF series is achieved by careful development and use of reliable, high output components for assembly.

All PARTISAN MAULWURF series vehicles are maximally unified through the use of components and aggregates of large series, which greatly simplifies the supply of spare parts for the mine fleet.

The PARTISAN MAULWURF series vehicles can be retrofitted over time and with new requirements and standards. Such a vehicle with planned upgrades can be operated for 50 years or more, saving resources and budget. The logistically simple delivery of serial components and units will limit not only repairs and scheduled maintenance, but also the modernization of the vehicle underground in the mining environment.

The PARTISAN MAULWURF series can be produced with any other drive - all-electric, hybrid - in addition to the version with a conventional combustion engine. The design concept used here allows the vehicle to be manufactured to fit virtually any size and application.

On October 10, 2017, all the world's leading news agencies published on their pages a report that the German designer of Russian origin, Dr. Yuri Postnikov and his assistant, Dr. Andrei Safonov, presented to the general public their latest development of the universal army SUV Partisan One, created by his company PARTISAN MOTORS.

An important reason for this general excitement was the competent PR campaign conducted by the manufacturer: the company gives a 100-year warranty on its vehicles.

On February 6, 2018, on the eve of the launch of the rocket by Ilon Mask to Mars, the entire world press flew the news that PARTISAN MOTORS presented its development PARTISAN ONE MARS EDITION, designed to conquer the human planets of the Solar System and offered Ilon Mask not to rush to send a rocket to Mars with its first electric Tesla.

Kommersant, a leading Russian news agency, summed up the results of 2017 and awarded Dr. Yury Postnikov the title of "Designer of the Year".

Following this, PARTISAN MOTORS presented its next development PARTISAN KREMLIN - a five-dimensional long wheelbase all-electric version of its car PARTISAN ONE, designed for the role of off-road support of motorcades of top officials.

Besides, the presented Partisan One car stands out very strongly against the background of its brothers and contrasts sharply with them not only by its large size, but above all by its square shapes, straight lines of body outlines and deliberate primitivism of appearance, as if the absence of any design.

The appearance of "Partizan" is a consequence of absolutely conscious and calculated steps to the design, which is designed to become the best car for the worst roads in the world.

The concept of Partisan One is not only drawings and presented running model. This is a complex of closely related design, technological, organizational, production and logistics measures designed to obtain a single unified transport platform, which will allow to produce and supply a whole line of machines - from a light SUV 4x4 to a heavy machine with the wheel arrangement 8x8.

Organization of undercarriage space and transmission tunnels implies the possibility of installation of various power units and their layout solutions. The engine can be installed both along and across the body. Hybrid or all-electric drive - originally included in the development.

The creators initially put in this car the possibility of its multiple modernization over time and the emergence of new requirements and standards. Such a car can be in operation, passing a planned upgrade, fifty years or more.

Partisan One is designed in such a way that its production can be adjusted in the shortest possible time in any part of the world literally "from the wheels" with very fast access to high circulation with stable product quality.

The vehicle can also be delivered to its destination in the form of prefabricated kits - one standard 20-foot sea container will hold five kits instead of one fully assembled car. This five-fold cartoon factor allows for an immediate increase in the supply of equipment to the area of application.

Partisan Motors Company preaches a conscious return to the values that were in demand in the automotive structures of the early 20th century, when the cars were few in number, asphalt roads virtually did not exist, and each trip was like an adventurous adventure: strength, functionality, big wheels, maintainability, long service life.