Buy This Chevy Suburban Limo, Be The CEO Of Your Neighborhood 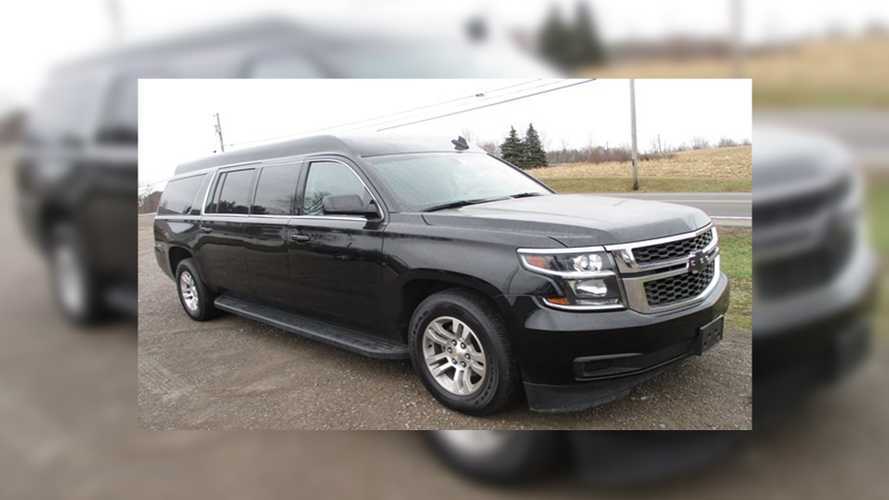 It's listed on Autotrader for the same price as a modestly equipped Mercedes-Benz S-Class.

There’s a curious fascination with full-size SUVs in the United States, especially those from General Motors. From soccer moms to secret divisions of the CIA, you’ll find black Chevrolet Suburbans everywhere, and yes, that includes school parking lots on prom night. We’ve seen a few SUVs stretched into limos and mobile offices over the years, but this one selling on Autotrader in Ohio caught our attention and not just because it’s priced frighteningly close $100,000. More on that in a bit.

Custom Suburbans For Everyone:

This Wild Chevy Suburban Is Like A Loud And Flashy Billboard

This rig is wearing a proper shade of intimidation black, but it’s more than just a longer Suburban. This build also wears a raised roof for added headroom, something very important when you need to get the party started before you get to the actual party. To that end, this stretched Suburban appears to have plenty of swag inside with leather accommodations, wood flooring, and deluxe electronic systems. What it doesn’t have, however, is extra seating. Seven people can pile into a typical Suburban, but the posh setup in this ride only allows for six – including the driver and front seat passenger.

The ad says this is a 2016 model, and aside from the tacky CEO badging you see on the outside, it’s surprisingly low-key. Even the wheels look to be stock Chevrolet gear, in basic LS trim no less. It’s done 22,500 miles, and if we’re honest, it feels a little thin for that near-as-makes-no-difference six-figure asking price. Admittedly, a stretch conversion isn’t cheap to build, but for $99,700 it seems like a set of Cadillac Escalade wheels could at least be part of the package.

Then again, this conversion feels less like a party limo and more like a highbrow executive office. In such situations, we suspect going slightly under the radar might be the preferable way to go.