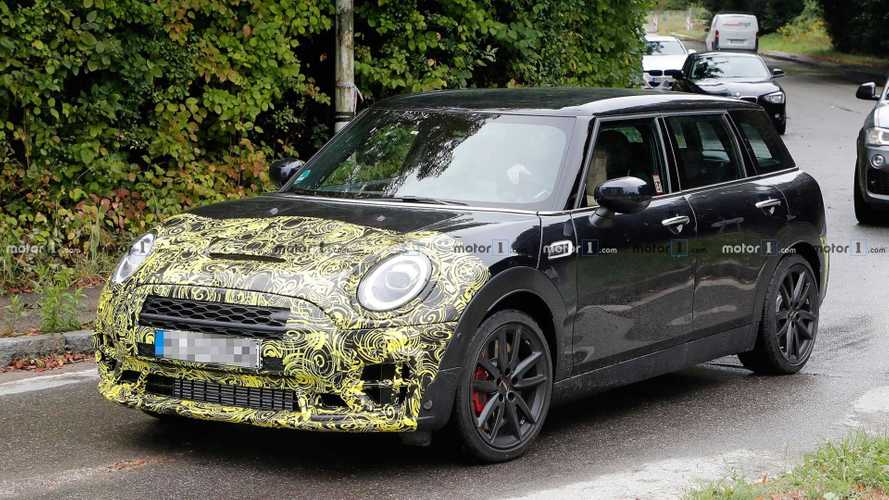 The pair might get the BMW X2 M35i's powertrain with a turbocharged 2.0-liter engine and eight-speed automatic gearbox.

The performance-focused John Cooper Works variants of the Mini Countryman and Clubman have upgrades on the way, and the tweaks should give them a whole lot mechanically in common with the new BMW X2 M35i, according to Motoring File. The BMW crossover's entire drivetrain would reportedly go into the Minis to give them a big boost.

Rumors have been circulating for a while about the updated Countryman and Clubman JCW gaining the BMW X2 M35i's powertrain, and spy shots (gallery above) possibly provided an early look at the tweaks for the wagon. While the exterior aesthetics are practically identical, the bigger changes are allegedly under the skin.

More on the big future of the Mini Countryman:

The X2 M35i uses a revised 2.0-liter turbocharged four-cylinder producing 302 horsepower (225 kilowatts) and 332 pound-feet (450 Newton-meters) of torque. It only comes with all-wheel drive with a limited-slip differential at the front axle and an eight-speed automatic. The result of this layout is a stylish crossover that reaches 62 miles per hour (100 kilometers per hour) in 4.9 seconds

Motoring File alleges the JCW trims of the Countryman and Clubman would share this identical setup. It would also make them some of them among the very few Minis in the brand's history not to offer buyers a manual gearbox.

Look for these updated JCW models to debut sometime in 2019, and at least one of them could be on sale before the end of the year.

In addition to the wagon and crossover, spy shots also reveal Mini is developing the new Hardtop John Cooper Works GP (gallery above). The exterior features an aggressive front fascia and a spoiler on the roof that's wider than the rear hatch. The current intel suggests the hot hatch would have 280 hp to 300 hp (209 kW to 224 kW), hinting that a version of the tuned 2.0-liter turbocharged engine might be under its hood, too.