It appears we're looking at an electric crossover-coupe with a sharp design.

[UPDATE] A press release has been attached, along with a new teaser image showing the concept's rear end. Skoda confirms it's an electric crossover-coupe based on the MEB platform, riding on 22-inch wheels.

With the Volkswagen Group announcing an armada of electric vehicles, it makes sense that Skoda will also play an important role in VAG’s zero-emissions ambitions. The Czech marque has already announced plans for a purely electric Citigo, which will follow the company’s very first electrified model – the Superb plug-in hybrid due most likely next month in Geneva. By 2025, Skoda will have a total of 10 electrified models in its lineup, including six pure EVs. 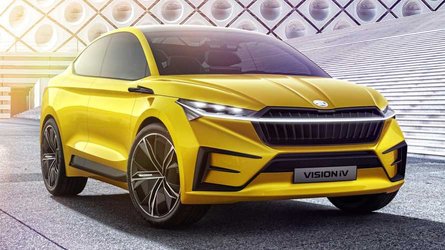 To signal the brand’s eco-friendly agenda, Skoda will display the new Vision iV concept next month at the same Swiss show. A press release has not been issued yet, but the two adjacent teaser images are showing a crossover-coupe mashup riding on oversized wheels like you’d come to expect from a concept. Conventional mirrors have been replaced by side cameras, and there’s no sign of regular door handles. The absence of a B-pillar could be a sign of suicide doors.

The Vision iV embodies Skoda’s latest design language with a focus on sharp lines and edges, while still carrying the corporate front grille despite the concept’s lack of a combustion engine. Overall, it looks like an evolution of the Vision E introduced in 2017, and might be closer to production than the original concept. Obviously, it’s not quite there yet.

With Skoda revealing plans for a production-ready Vision E due in 2020 as the brand’s first MEB-based vehicle, we won’t be too surprised if the Vision iV is going to be a follow-up to the 2017 concept.  Technical specs are not available at the moment of writing, but the Vision E had dual electric motors with a combined 306-horsepower output, 311 miles (500 kilometers) of range, and a top speed of 112 mph (180 kph).

The public debut of the Skoda Vision iV (after the E, X, and RS) is scheduled for the first press day of the 89th Geneva Motor Show, on March 5. 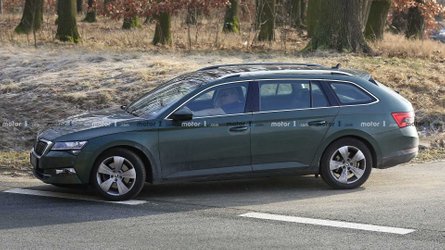 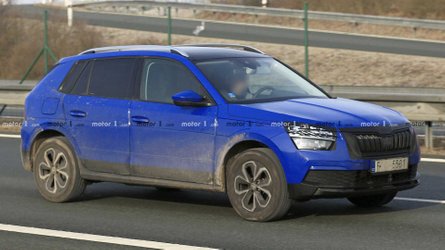 Mladá Boleslav, 12 February 2019 – The Czech car manufacturer will be presenting its next step towards electric mobility at the Geneva Motor Show (5 to 17 March) with the ŠKODA VISION iV concept study. Now releasing two design sketches, ŠKODA whets the appetite for its first vehicle based on the Modular Electric Drive Kit (MEB). The four-door crossover coupé features fascinating sporty and emotional lines. Oliver Stefani, Head of ŠKODA Design, explains on ŠKODA Storyboard, which design features of the VISION iV will be typical for future ŠKODA EVs.

The ŠKODA VISION iV combines an athletic body, 22-inch aerodynamically optimised wheels and powerfully flared mudguards with a pronounced coupé-like, flowing roofline. A characteristic tornado line connecting the front and rear emphasises the clean surfaces of the doors without handles. Cameras, whose housings are visually reminiscent of shark fins, take the place of traditional exterior mirrors.

The front characterises a reinterpretation of ŠKODA’s typically wide covered grille, featuring fine vertical ribs and crystalline structures. The horizontal light strip in the upper part of the grille and strikingly large air intakes in the front apron emphasise the sporty appearance. The powerful rear features aerodynamic spoiler edges and crystalline LED tail lights. They redefine the typical ŠKODA C-shape and emphasise the width of the vehicle in combination with a light strip above the rear diffuser. Another eye-catching element at the rear is the ŠKODA logo; the individual letters are lit up in red.

2019 marks ŠKODA’s entry into the era of electromobility. 124 years after the company was founded, the Czech automaker is launching the SUPERB PHEV with plug-in hybrid drive and fully battery-powered version of CITIGO. In 2020, the first production vehicles will follow based on the MEB. Over the next four years, ŠKODA is investing around two billion euros in alternative drive systems and new mobility services and will have introduced more than ten electrified models by the end of 2022.