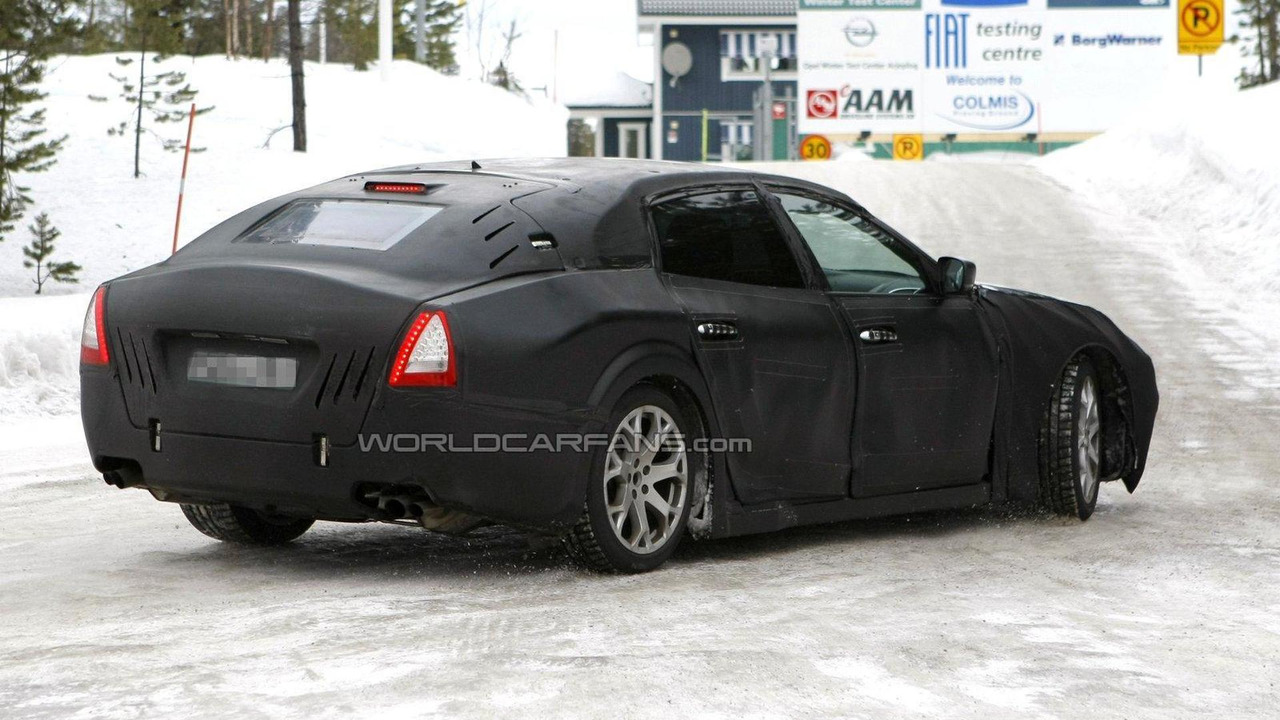 Spy photographers have caught for the first time a full-body prototype of the next generation Maserati Quattroporte cold weather testing in Northern Sweden recently.

Spy photographers have caught for the first time a full-body prototype of the next generation Maserati Quattroporte cold weather testing in Northern Sweden recently. The photos follow initial photographs and video of test mules using current Quattroporte bodies a few months ago, but these new shots show the real car wearing its new body.

Naturally, Maserati engineers have gone to great lengths to hide the vehicle's actual body lines by attaching faux exterior panels, however, we can still see the overall shape. Photos reveal the Quattroporte will evolve into an executive five-door hatchback body style (aka four-door coupe) similar to the Mercedes-Benz CLS-Class and Audi A7 Sportback as it appears to have an arcing roof line that almost extends into the lip edge of the boot lid.

As previously confirmed by Maserati sources and evident in these photos, the new Quattroporte (codename M156) will grow in size to make room for the 'baby Quattroporte' and better compete with the Audi A8, BMW 7-Series and Mercedes S-Class.

The Quattroporte will receive an updated version of its 4.7-liter V8 engine with up to 475 PS (354 kW / 469 bhp). It is expected to be connected to a ZF eight-speed automatic transmission with a stop-start system and an optional all-wheel drive system.

As enticing as that sounds, there have been rumors the Quattroporte will receive 'DNA' from Chrysler in the form of a twin-turbo version of their Pentastar V6 as well as structural body pieces sourced from the 300C.

Although unconfirmed, the all-new Quattroporte is expected to debut at the Paris show in September if development trials goes as scheduled. However, if there are delays, the debut could be pushed off until the Detroit Auto Show in early 2013.