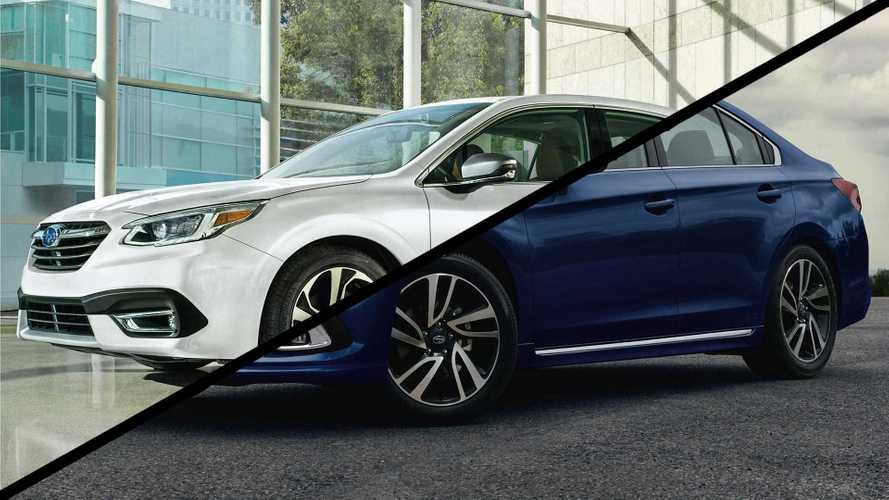 The changes are subtle on the outside but significant on the inside.

The 2020 Subaru Legacy debuting at the 2019 Chicago Auto Show launches the seventh generation of the brand's midsize sedan. It brings some major technological upgrades to the machine, and the best way to see them is to compare the new four-door to the previous generation.

The 2020 Legacy goes on sale this fall. Pricing isn't available for it yet.

Subaru's designers take an evolutionary approach with the exterior of the 2020 Legacy. At the front, the grille now tapers inward more at its lower portion. The headlights retain a similar shape but are skinnier now.

The A-pillar has a slightly steeper rake, and the roofline flows more smoothly to the rear deck. The result is a sleeker, more aerodynamic look than the existing model's somewhat more upright styling.

Similar to the front, the rear of the 2020 Legacy is very similar to the 2018 model. The taillights now have a sharper shape with bracket-shaped brake lamps. Dual circular exhaust pipes still emerge from below the bumper.

While the outside doesn't look too different, the 2020 Legacy is a whole new vehicle on the inside. The most obvious change is the new 11.6-inch, portrait-oriented infotainment screen that comes on all but the base trim. The larger screen replaces the optional 8-inch, landscape-oriented display from the current model.

Another major upgrade to the cabin's appearance is the soft-touch material with visible stitching along the dashboard and door panels. In combination with the metallic trim, the updated interior has a fresher, more upscale appearance. For more driver comfort, the heated seats now have three temperature settings, rather than two, and the warming reaches up to occupants' shoulders to keep them warmer. The connectivity includes an auxiliary jack, two 12-volt DC outlets, and four USB ports – two in front and two in back.

Subaru also updates the Legacy's engine options. The 2.5-liter flat four-cylinder is still around. However, it now produces 182 horsepower and 176 pound-feet, rather than 175 hp and 174 lb-ft in the existing sedan. Fuel economy improves, too. The company predicts the 2020 model with the revised engine gets 27 miles per gallon city and 35 mpg highway. The EPA rates the current version at 25 mpg city and 34 mpg highway.

Subie's 3.6-liter flat-six finally retires from the Legacy lineup for the 2020 model year, and a 2.4-liter turbocharged boxer four-cylinder replaces it. The new mill makes 260 horsepower and 277 pound-feet, versus 256 hp and 247 lb-ft from the old six. Fuel economy also improves because the turbo four has an estimated 24 mpg city and 32 mpg highway, instead of 20 mpg city and 28 mpg highway for the six-cylinder.