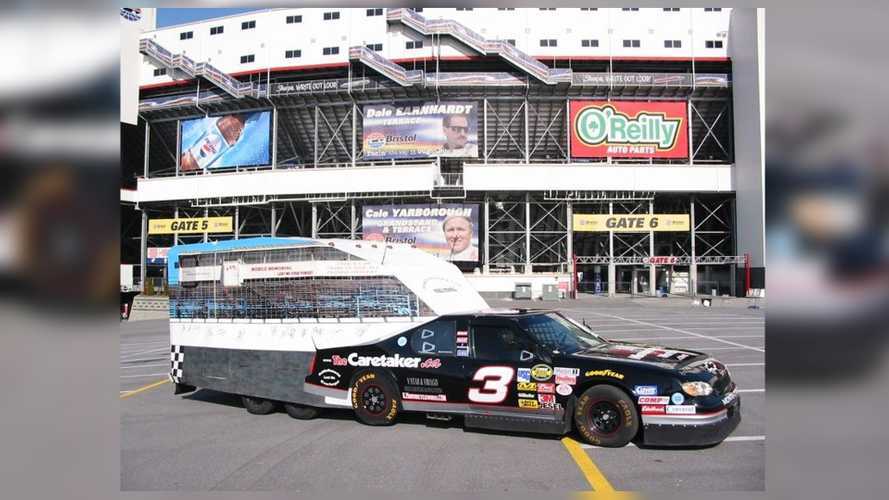 There are few motoring genres as wide-ranging as recreational vehicles. We say that not because RVs can come in sizes from extra small to gargantuan. Nor do we say that because RVs can take the form of trucks, vans, or trailers. We say it because RVs can be pretty much anything, provided you have the will to build and access to a welder. Case-in-point is this NASCAR-themed ride, brilliantly painted to resemble NASCAR legend Dale Earnhardt’s Monte Carlo. And yes, you can buy it for just $6,000.

What will that buy you? For starters, this isn’t a Monte Carlo. It’s not a motorhome either, or at least, it wasn’t originally. You’re looking at the pinnacle of 1980’s Oldsmobile style, specifically a 1989 Olds Eighty-Eight. That is, the front portion of this machine is an Eighty-Eight. As you see in the photo gallery below, the former front-wheel-drive sedan was cut in half and welded to a sprawling steel frame. Unfortunately, there aren’t any photos showing what’s inside the beast, but the clever paint and detailing outside is nothing short of awesome.

The Olds is listed at Kijiji.ca for $6,000, and it’s currently located in Trenton, Ontario. According to the ad description, over $60,000 was invested in this project and we have no problem believing that. The special RV has done 350,000 kilometers (217,480 miles) over the last 15 years, primarily from highway trips between Florida and Trenton. It’s listed as mechanically perfect and running great, with motivation coming from a venerable 3.8-liter V6 under the hood, which should be making around 165 horsepower (123 kilowatts) if our ‘80’s car knowledge is correct. It’s not exactly a powerhouse for toting such a big load, but we suspect it’s at least up to the task.

Unfortunately, the ad also mentions the owner is selling because he has cancer. Peter Kasala is the name mentioned with the listing, and honestly, even if the inside was gutted, $6,000 seems like a steal for this truly unique vehicle. We can only imagine the attention this garnered cruising into one of America’s superspeedways on a NASCAR weekend. As for Mr. Kasala, we offer him the best of luck with the sale, and fondest wishes in his battle with cancer.