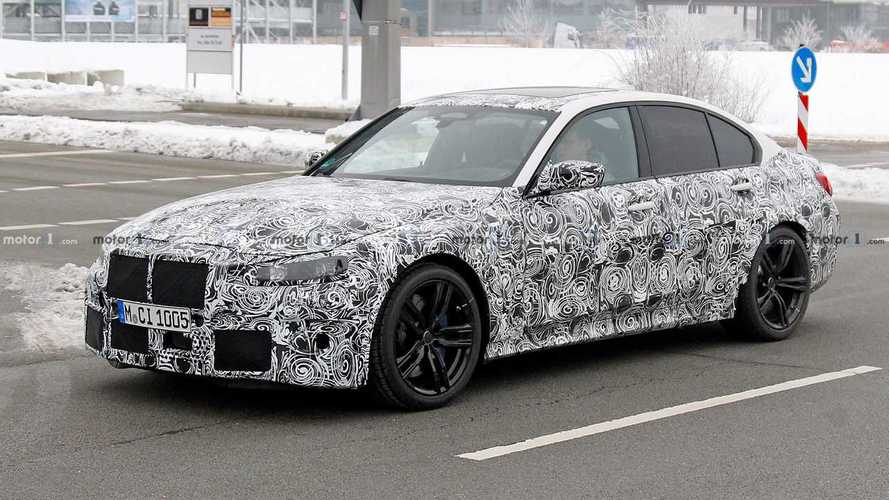 We're counting the days to the M3's revival.

It’s been a few months since we caught BMW testing the next-generation M3. The latest shots out of Munich still feature a fully wrapped prototype, but we’re getting closer to a reveal because some of the wrap has come off. The front is still obscured but it’s wearing production-ready headlight lenses, and for the first time we’re shown the taillights as well. There could still be some work to do on the rear fascia, as the exposed exhaust isn’t as attractive as, say, a cool diffuser.

We’re also hearing some definitive news on M3 statistics, albeit on an unofficial level. The car should pack 480 horsepower (358 kilowatts) from a 3.0-liter twin-turbo inline six cylinder, and it will deliver that power to the rear wheels through an eight-speed automatic. An xDrive model powering all four wheels will also be available, though it’s said to have a two-wheel-drive mode similar to what BMW offers on the M5. Furthermore, the new M3 is expected to be a touch lighter than the previous model, despite the new 3 Series growing in pretty much every dimension.

With stats like this, the new M3 should be exceptionally quick. However, if the prospect of an all-wheel-drive M3 with an automatic transmission sounds like an affront to the storied nameplate (we wouldn’t blame you if you did), BMW is also expected to offer a version called Pure. In short, this will be a somewhat stripped-down model available with three pedals and a proper six-speed manual gearbox, turning just the rear wheels. The downside is that BMW will also reduce engine output to 460 hp (343 kW) for reasons we don’t yet understand.

There’s one other bit of information to share. Earlier we said a reveal is getting closer, and our sources are now saying BMW is shooting for a September celebration. The plan is to pull the wrap off the M3 at this year’s Frankfurt Motor Show, where we suspect the much-anticipated sports sedan will enjoy a rousing homecoming.