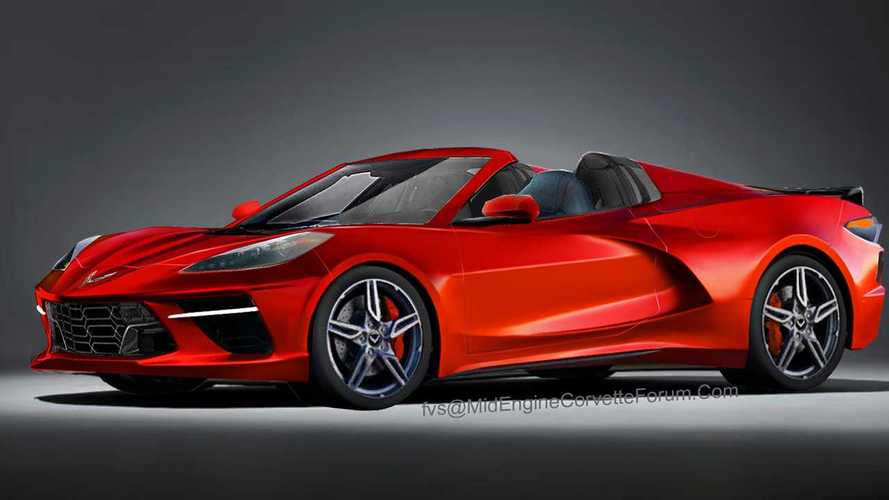 Visibility looks slim with the top up, but that's what cameras are for.

News is still quiet on the mid-engined Corvette front, but MidEngineCorvetteForum.com is making the most of the downtime. Forum members FVS and Chazcron have pooled their Photoshop skills to give us a glimpse at how a full-on convertible mid-engined Corvette might look. There are a few more photos and some cool animated GIFs at the forum that are worth a look as well.

The image at the top of the article comes from FVS and takes in the entire car. We haven’t seen smoking-gun evidence yet of a convertible model in prototype form, but spy photos from earlier in the year do show C8 test vehicles with some curious camo on the back. Current thought is that a convertible model would use a retractable hardtop with a different design to the rear pillars and engine cover. Forum member Chazcron gives us a closer interpretation of that in the rendering below.

There is a bit of creative liberty happening here since there are no clear-cut convertible shots to work from. If this does end up being a close match to the production car, we’re not liking the rearward visibility through that Countach-esque back window. Backup cameras or even a 360-degree top-down view would almost be a necessity, but that’s the price you pay for a sexy mid-engined sports car. And we’ll readily admit to liking what we see in a C8 convertible.

This will be different from the Targa model that also appeared recently at the forum, linked above. Corvettes have long had a Targa top option for coupes, with the center section lifting out manually and stored in a bag under the rear hatch. Whereas the Targa maintains the coupe’s roofline, the convertible uses a flat engine cover and arched buttresses behind the two front seats. Honestly, both models look fantastic without a roof.

When the C8 Corvette finally debuts, we'll likely see the hardtop first with a convertible coming later. We’re still aiming for an unveiling either at the New York Auto Show in April, or a standalone event later in the year.