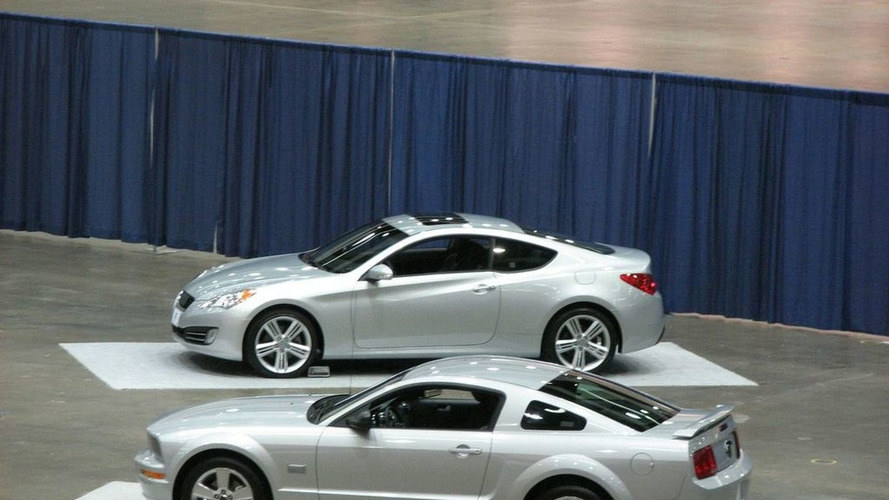 Snapped during a market research event, the Hyundai is standing next to its target competitor, the Ford Mustang.

WorldCarFans sister site CarSpyShots.net has posted today these amazing shots of the all-new Hyundai rear-wheel-drive sports coupe. Looking a bit watered down compared to the recently released design sketches of the muscular Concept Genesis Coupe, this vehicle snapped during a market research event is standing next to its target competitor, the Ford Mustang. In an effort to minimize preconceived biases, both vehicles are painted exactly the same color as well as having all emblems covered. Additionally, participants are given a questionnaire about the vehicles presented regarding their impressions in which they refer to the vehicles by a given letter. As seen in these photos, the Hyundai is wearing a sign on the front bumper with the letter F.

Although spy photos taken from research clinics are nothing new, these are the clearest photos we have seen from such an event. Normally, the specially selected participants of these market research events are obviously prohibited to have cameras. But judging by the vantage point of the photos it seems the spy photographer may have been an insider with access to the rest of the facility allowing a view from above the curtains.

The presence of the Mustang as the target competitor reaffirms previous reports that the sports coupe will receive a V8 engine (the 4.6-liter from the Genesis). Codenamed BK, but often referred to as the Hyundai Mustang by Hyundai insiders, the sports coupe replaces the front-wheel-drive Tiburon coupe, but will most likely be given a new name since it has nothing in common with its predecessor as well as emphasizing a high performance rear-wheel-drive nature. The Hyundai Genesis Coupe which is based on the BH/Genesis platform will first arrive in Asia in late 2008 or 2009, and arrive in the U.S. for the 2010 model year. A convertible version is expected to follow.

New information from NewTiburon.com.  According to a participant of the focus group, two engines mentioned were a 2.0-liter turbo with 215hp and 217 ft-lbs of torque priced at $19,000 and a 3.8-liter V6 with 300hp and 280 ft-lbs of torque starting at $25,900.  There was no mention of a V8 engine but that doesn't mean it won't happen.  However, the focus group was conducted in June of this year which leaves plenty of time for changes.  Other features mentioned include iPod integration in center console, bluetooth function through head unit, sunroof, mirror mounted LED turn signals and limited slip.