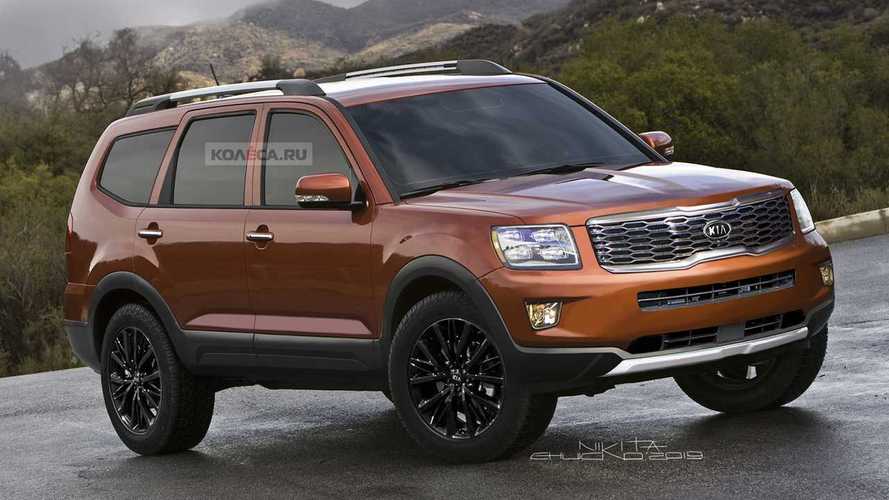 The next Kia Mohave only recently made its first appearance for spy photographers. Sold in select markets outside the United States, the chunky SUV matches up pretty well with the Sorento as far as size and capabilities are concerned. The prototype we caught was wrapped in very heavy camouflage, but the folks at kolesa.ru did some sleuthing and created these outstanding renderings of how the final product might look once all is revealed.

If you’re thinking this looks familiar, it should. Rumors we’ve been hearing about the Mohave suggest the revamped SUV will borrow heaviliy from the full-size Telluride, and that influence is clearly seen in these renderings. For comparison, check out the Telluride in the gallery below.

The grille and front fascia are pulled almost unchanged from the big SUV, and the headlights retain a dual-beam layout that shifts horizontally on the Mohave, as opposed to the vertical orientation for the Telluride. Spy photos give us a taste of those lights, as well as the lower driving lamps and both features are represented well here. Looking further back, the rearmost side glass is obscured on the spy shots but it makes sense that Kia’s smaller SUV will mimic the up-kink look on the Telluride versus the swooping-straight shape on the Sorento.

The renderings follow the Telluride's path, though Kia’s decision to cover the back glass on the prototype certainly adds to the mystery. For that matter, the extremely heavy camouflage at the back hides absolutely everything, so the renderings adapt the Telluride’s rear gate and fascia to round out the digitially revealed Mohave.

Check Out The Telluride:

Our spy sources tell us the Mohave won’t be an all-new creature. The SUV’s current underpinnings are expected to soldier on beneath all the updated body work, and that could also extend to the current engine options as well. Updates to tech equipment and safety systems are expected, however.

At this point it’s unknown when the updated Mohave might appear, or if it will replace the Sorrento in the U.S. market. A best guess would have the covers lifted late this year or early next year.