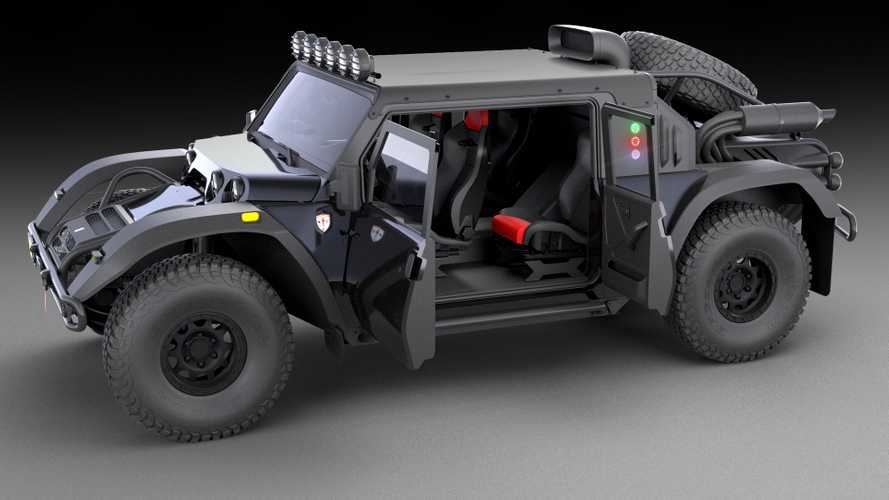 You can also order it with armor plating.

Remember that bonkers SUV from Scuderia Cameron Glickenhaus called the Boot? It’s been a while since we last heard about it. In fact, it’s been nearly a year since we were privy to some renderings showing the weird mid-engined off-roader mounted to amphibious gear. A new set of renders dropped yesterday from James Glickenhaus himself, and they show what looks like a production-ready model. However, there’s a bit more to it all than that.

Skip the fact that Glickenhaus linked the photos to a Facebook sales post, and check out the post itself. These are listed as teaser images for the 2021 four-door Boot, which is said to come out next year. However, there is – or rather, was – a two-door Boot for 2019 but all five copies are already sold. Of those, one was slated as a road legal racing version, which brings us to another head-scratching moment in this post. Apparently, some of the 2020 models can be bought with racing slots for the Baja 1000, including support from SGC. Interesting.

Prior Visits With The Boot:

Glickenhaus Announces The Boot, Will Take It To Top Of Volcano

As for the available models, “probably only 17” are up for grabs. You can’t buy them through Facebook though – the post says sales go through SGC dealer Manhattan Motor Cars in the New York area, and Ted Johnson’s Milestone Motors in the Southeast. Other dealers are said to be coming soon. If you want one be prepared to shell out $287,500 for a fully equipped model, though there’s also a level 6 armor option for $166,750 that can protect against small arms fire from assault rifles. It seems this SUV takes things very seriously.

The post does describe a very cool seating arrangement for the four-door Boot. Front occupants sit closer together, with rear passengers spaced further apart. This allows the folks sitting in back to clearly see forward, a feature that Glickenhaus says can reduce motion sickness. And let’s be honest – that can be a real problem when pounding over jumps in Baja or taking evasive maneuvers to avoid small arms fire.

Frankly, the renderings we’ve seen of this crazy SUV look amazing. It’s weird and functional and awesome, but now we’re ready to see the real thing. Hopefully, there will be an actual production model to accompany the forthcoming press release. Glickenhaus tells us that's all coming in May, and we totally can't wait.