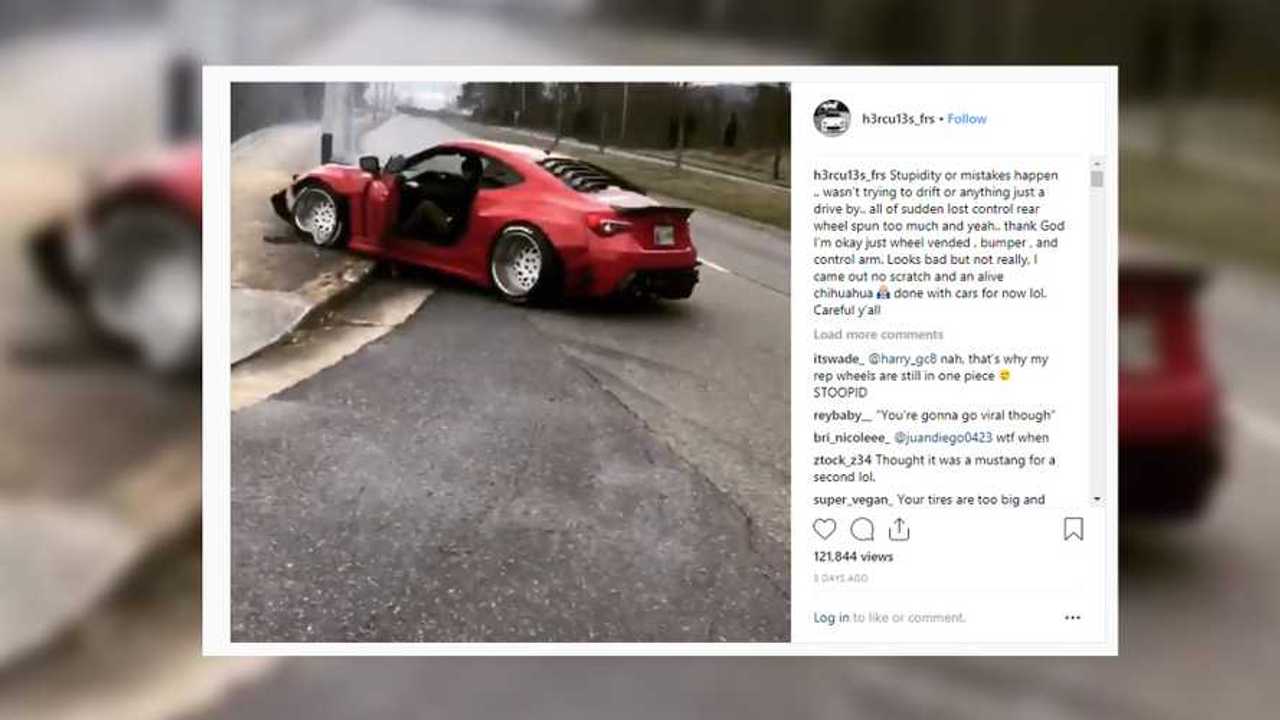 The driver wasn't hurt, but his internet rep is in critical condition.

Just a quick heads up before you click on the video below. There is a bit of not-safe-for-work language in the clip, but that’s to be expected when a wildly custom Scion FR-S does a full 360-spin in front of you and crashes into a pole. Here’s the action as posted by h3rcu13s_frs on Instagram.

We will assume h3rcu13s (henceforth known as Hercules because we hate names with numbers in them) is the driver of this red Scion, as the Instagram post opens with a description of what happened. Actually, if the description is accurate, nothing happened. Hercules was doing a drive-by for the camera and when the rear of the car stepped out. He tried to correct but it was too little too late, and the Scion spun into the opposing lane of traffic before coming to an abrupt stop against a telephone pole. Hercules wasn’t injured – not even a scratch according to the post – and also, he’s apparently done with cars. For now.

It Could've Been Worse:

Man Films High-Speed Chase That Crashes Into Him
⠀

We tried scrolling through the comments to see if there’s any other information on why this predecessor to the Toyota 86 broke loose, but alas, the post has 121,844 views in just three days and the comments are already filled with Mustang crash references and trash talk about how Hercules can’t drive. Looking through other pictures posted to the account, the FR-S certainly wasn’t stock with a widebody kit and fat tires stretched to the breaking point on deep dish rims.

Hercules says he wasn’t trying to drift when the accident happened, though it does sound like the engine was under full throttle when the car broke loose. Even if the mill was stock, it’s feasible to believe the outstretched tires simply lost traction because they were, you know, outstretched. Stanced cars may look good – sometimes – but that doesn’t mean they drive well.

We’re just glad Hercules is okay, and for all of you laughing, you too have made mistakes behind the wheel. Whether he’s done with cars for good or not, hopefully this lesson in physics and viral internet posts translates to something positive.