VW Reviving The Classic Beach Buggy As An Electric Concept 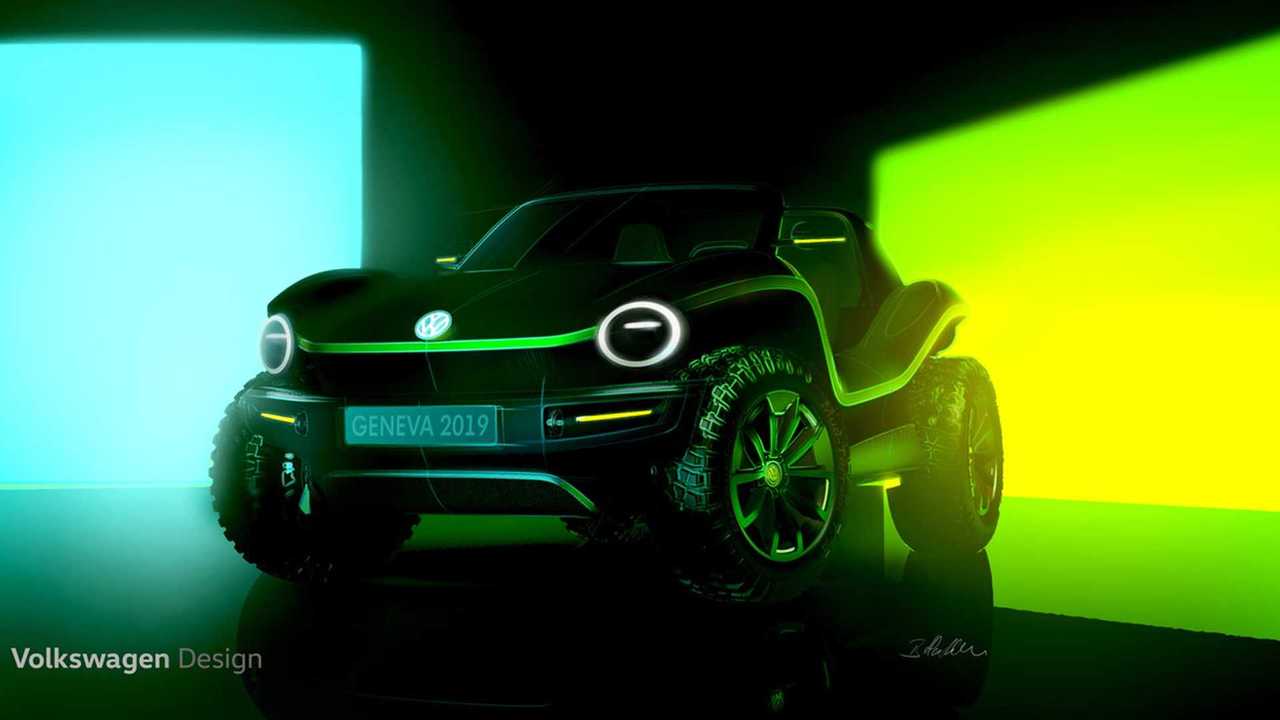 It will be unveiled next month at the Geneva Motor Show.

In the late 1960’s something curious happened in America. Actually, lots of curious things were taking place back then, but in the car world, people were yanking the exterior bits off Volkswagen Beetles and replacing them with open-air, barebones bodies. The result became the iconic VW beach buggy, and now, the automaker is reviving the concept with an electric twist.

Volkswagen just dropped a pair of teaser photos for a new dune buggy concept, based not on the outgoing Beetle but the company’s Modular Electric Drive Matrix (MEB) platform. Yes, the classic rear-engined beach buggy is now reimagined as an all-electric dune hopper, and though the teaser photos don’t reveal all the details, we can see that the core elements appear to be present. The body is all curvy and swoopy, the roof is open, and there are no doors. The only thing missing is a properly vintage coat of crazy metallic paint, though the teasers suggest the concept will wear a garish shade of green. That works for us.

“A buggy is more than a car,” said Klaus Bischoff, VW’s head designer. “It is vibrancy and energy on four wheels. These attributes are embodied by the new e-buggy, which demonstrates how a modern, non-retro interpretation of a classic can look and, more than anything else, the emotional bond that electric mobility can create.”

As this is just a teaser, we don’t have details to offer just yet. We do know that Volkswagen’s primary mission with this retro reboot isn’t so much about tapping into a nostalgic vibe, but showcasing the versatility of its MEB chassis. There’s certainly something to be said for the compact nature of an electric system – there’s no need to route exhaust systems, fuel lines, or make room for bulky driveline components that could change from vehicle to vehicle. We’re not sure aftermarket body-swapping will become a new fad for electric vehicles, but from a practicality standpoint, it’s easy to see how an automaker could easily adapt the platform to accommodate everything from sports cars to SUVs.

VW will officially reveal its dune buggy concept in just over a month at the 2019 Geneva Motor Show.

THE DUNE BUGGY IS BACK – AND NOW IT’S ELECTRIC!

Wolfsburg (D) – Volkswagen is bringing a legend back to life! At the beginning of March, the Wolfsburg-based company will reveal the first fully electric version of a new dune buggy. Taking its cues from popular American dune buggies, the concept vehicle is based on the modular electric drive matrix (MEB), demonstrating how multifaceted the new platform is.

“A buggy is more than a car. It is vibrancy and energy on four wheels. These attributes are embodied by the new e-buggy, which demonstrates how a modern, non-retro interpretation of a classic can look and, more than anything else, the emotional bond that electric mobility can create,” states Klaus Bischoff, Head Designer at Volkswagen.

The concept of the fully electric buggy is based on the vehicles that were created in the 1960s in California. Back then, the Beetle chassis served as the basis for these buggies; now, the MEB is proving to be just as flexible. True to the original vehicles, this reinterpretation of a dune buggy has no fixed roof or conventional doors, while the large wheels and off-road tires and open side sills dominate the overall look.

The new MEB concept vehicle shows that this fully electric platform can be used for more than just large-scale series production models. Like the Beetle chassis of yesteryear, the MEB has the potential to facilitate the development of low-volume niche vehicles.

The history of recreational vehicles and Volkswagen technology is a long one. From the Beetle convertible and special bodies produced by companies such as Hebmüller and Rometsch to dune buggies like the Meyers Manx, the Beetle chassis allowed for creative custom solutions for decades. Globally, around 250,000 individual vehicles were built as one-offs or at low volumes through to the 1980s.

The latest one-of-a-kind model, the fully electric concept buggy, will be shown for the first time at the 89th International Geneva Motor Show, from March 7-17. The Volkswagen press conference will start at 10:20 am in Hall 2 on March 5.