Where have we heard that name before?

Skoda’s teaser campaign for its Europe-bound subcompact crossover continues this week with a second episode in which we get to find out the model’s name. As originally believed, the B-segment model won’t carry over the Vision X moniker of the concept presented last year as instead it will use a word beginning with “K” and ending in “Q” like the bigger Karoq and Kodiaq. Rather than coming up with an entirely new moniker, Skoda has decided to go with “Kamiq” – a name it’s been using in China for another small crossover since 2018. The model (pictured at the end) is locally produced at the factory in Nanjing and generated 27,900 sales last year. 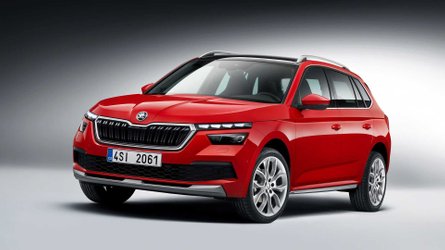 Even though it will carry the same moniker as the CN-spec crossover, the European version is set to adopt different styling to better cater to the European market. The teaser released so far by Skoda hints the production version will stay true to the aforementioned Vision X concept and by that we mean it will have the split headlight design. The Chinese Kamiq has a pair of conventionally styled headlights. There’s a pretty good chance the back of the Euro Kamiq will also be different, much like the Octavia sold in Europe is different than the one available in the People’s Republic.

Essentially Skoda’s version of the Volkswagen T-Cross and SEAT Arona, the new city-oriented crossover from Mladá Boleslav will ride on the VW Group’s MQB platform and is set premiere early March at the 2019 Geneva Motor Show. It’s too early to talk about pricing, but it should undercut its fancier VW sibling while offering a more spacious cabin and plenty of Simply Clever features like you’d expect from a Skoda.

The oily bits are pretty much already known since we’re expecting the Euro version of the Skoda Kamiq to start off with a three-cylinder 1.0 TSI and level up to a 1.5 TSI like its German and Spanish siblings. It remains to be seen whether there’s going to be a 1.6 TDI, but it could happen since its two cousins are available with a diesel engine.

Mladá Boleslav, 24 January 2019 – ŠKODA’s new SUV is called the ŠKODA KAMIQ. The crossover is the third SUV for the European market and marks the next step in the Czech manufacturer’s SUV campaign. The word KAMIQ comes from the language of the Inuit people living in northern Canada and Greenland. It describes something that fits as perfectly as a second skin in every situation. Reason enough to give the new crossover model for the European market the same name as the SUV already established in China.

The ŠKODA KAMIQ is an urban crossover model that presents itself as an ideal companion to everyday life in the modern city and beyond. The name ŠKODA KAMIQ is already established as the name of a model in China and is therefore perfectly suited to the new crossover model. At the same time, the designation falls within the nomenclature linking all models in the SUV model range – the names of all current ŠKODA SUV models start with a K and end with a Q.

With the new ŠKODA KAMIQ, the Czech carmaker is taking the next step in its SUV campaign and is expanding its offering with a compact and lifestyle-oriented entry-level model for the European market. The ŠKODA KAMIQ combines the agility and handling of a compact car with the traditional advantages of an SUV – higher seating position, better visibility, easier to get in and out, and higher ground clearance. Based on the modular transverse matrix, the ŠKODA model offers new assistance systems, and convinces with numerous ‘Simply Clever’ features that popularised the brand just as much as the generous space available.

The world premiere of the new ŠKODA KAMIQ takes place at the Geneva Motor Show between 5 and 17 March 2019.