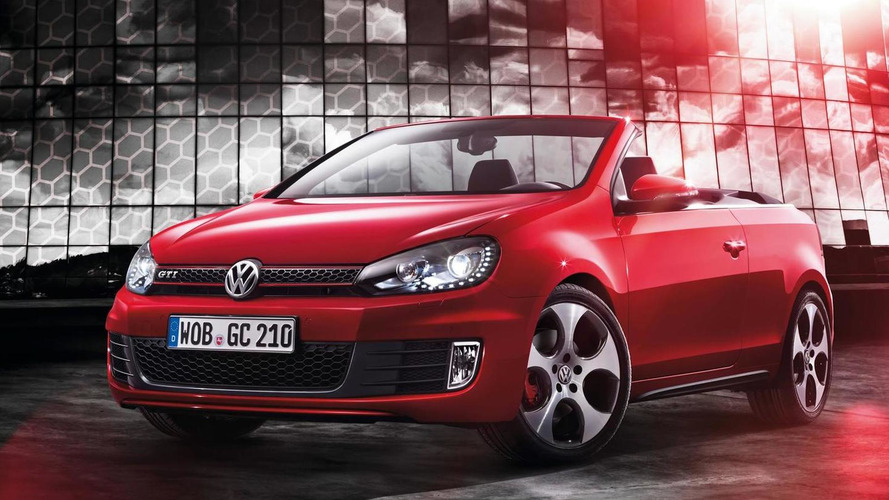 Volkswagen has released the first images and details of the most powerful production Golf GTI Cabriolet to ever grace the planet. It is the first time we have seen the open-top variant of the Golf GTI since the first generation and is likely to be the final variant of the current model series before it is replaced next year.

The Golf GTI Cabrio sources its personality from a 2.0-litre turbocharged four-cylinder engine. It generates 210 PS (155 kW / 208 hp) and 206 lbs ft (280 Nm) of torque at just 1,700rpm and is mated with a the six-speed manual or optional six-speed dual-clutch DSG gearbox. Whilst the GTI hatch is capable of accelerating from 0-100kph (0-62mph) in 6.9 seconds, the Golf GTI Cabriolet is 0.4 seconds shy of that figure due to its aerodynamic disadvantages. Top speed is reached at 147 mph (236kph).

The Golf GTI Cabriolet features an electrically powered fabric roof that takes 9.5 seconds to fold away and can be operated at speeds of up to 18mph (30kph).

Sales will begin during the second half of 2012 with pricing set to be announced closer to the launch date. Those wanting to get a closer look at the Golf GTI Cabriolet will have the chance when it celebrates its world debut at the Geneva Motor Show next week.