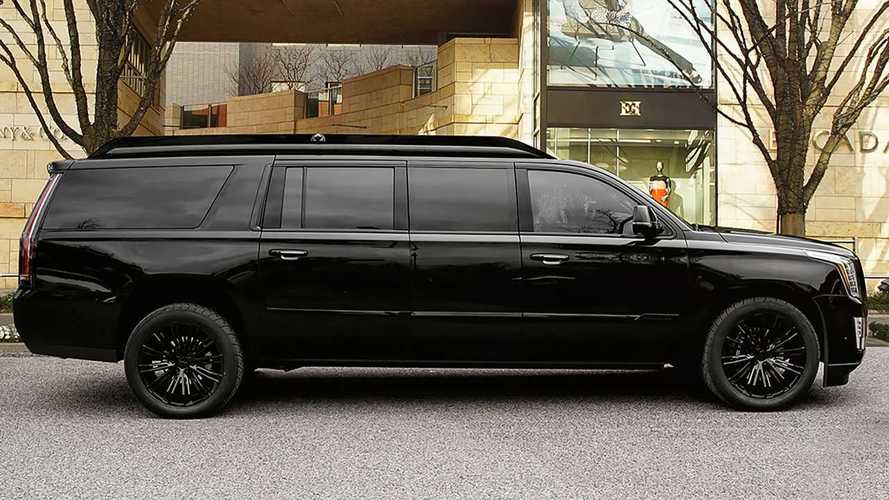 Lexani Motorcars is known for creating some swanky rides out of everything from SUVs to vans. The latest offering from the company is a stretched Cadillac Escalade, because the standard model is a little tight on space to begin with. Yes, that’s sarcasm, but for those high-level executives seeking a mobile office, stretching the Caddy to 18 feet certainly does provide a bit more space for meetings. With that in mind, say hello to the aptly named Cadillac Escalade 30” Extended Viceroy Edition.

Work And Play Anywhere You Want:

Mercedes Sprinter By Carlex Is A Luxury Office For The Road

What all is included aside from a super-sized body? A mobile office certainly needs equipment, and Lexani spares no expense in the tech department. The company claims “numerous unique proprietary upgrades” including an electronic partition designed to feature a curved flat-screen television. It’s also fitted with numerous Apple iPads, a beefed-up air conditioning system, video conferencing capability, and the raised roof features ambient LED lighting with a cool starfield layout as well. It’s all controlled through a Control4 touch screen management setup, and when the work is done (or when a distraction is necessary), there’s a PlayStation 4 hooked up as well.

Outside the tech upgrades, there are all kinds of luxury add-ons. The seats are diamond-stitched leather and equipped with airline-style tables for laptops or feasting. Extras include a VIP package with champagne flutes and glasses, not to mention lots of suede and leather. There’s also a security package that adds B7-level armor, so yeah, this Escalade can be fully equipped.

As with most custom vehicles such as this, there’s no mention of cost. The old adage applies here – if you have to ask, you most likely can’t afford it. Considering a new Escalade starts at $75,195, expect the Extended Viceroy Edition to also extend well into six-figure territory.

Literally speaking, the 30" stretch Viceroy dwarfs it's predecessors. From the wide-open layout, state of the art technology, and entertainment capabilities- no stone has been left unturned. Lexani Motorcar's world's first proprietary electronic partition—crafted to carry a curved smart TV, is just one of the numerous unique proprietary upgrades this discreet masterpiece boasts.

For the security-conscious Lexani Motorcars offers up to B7 level armoring which maintains the original appearance and design with superior optics. They have up fitted Escalades, Navigators, Yukons, Land Cruisers, Sequoias, and Mercedes-Benz Sprinters with stunning results.