The styling tweaks are subtle, but the French city car is as adorable as ever.

A French take on the Smart ForFour, the Renault Twingo is getting a mid-cycle refresh to remain competitive in Europe’s A-segment. As cute as a button, the pint-sized hatchback might look just about the same as its predecessor, but the devil is in the details. For starters, you haven’t seen that Mango Yellow color before on the city car, which is the same we can say about the Quartz White shade and the 16-inch alloy wheels.

Renault’s design team also fiddled with the front bumper now featuring a larger painted surface after integrating the daytime running lights into the headlights. Speaking of which, the LED DRLs double as turn signals and take the shape of the letter “C” to give the 2019 Twingo a smart look. Go for the range-topping Twingo and you’ll get some chrome for a more upscale appearance.

Changes continue at the back where the “C” lighting motif can be noticed in the taillights, while the tailgate adopts an easier-to-use handle located underneath the rear wiper. Interestingly, Renault has decided to lower the Twingo’s ride height by 10 millimeters (0.4 inches) to reduce drag coefficient and consequently boost fuel efficiency.

Stepping inside the tiny cabin, the most expensive version of the range gets an updated 7-inch touchscreen (with Android Auto and Apple CarPlay) and fresh seat upholstery. To spice things up, Renault will throw in a white lacquered finish on the dashboard and will add topstitching on the door armrests. The center console has been reconfigured to accommodate an adjustable holder suitable for a cup or a smartphone in the upright position. In addition, the 2019 Twingo gets dual USB ports and a jack plug, along with updated switchgear and a closed glovebox standard across the range.

The rear-engined, rear-wheel-drive hatchback will be offered with a choice two gasoline engines, both with three cylinders. The naturally aspirated 1.0-liter is hooked up exclusively to a five-speed manual transmission and can be had with either 65 horsepower or 75 hp, and in both cases it will push out 95 Newton-meters (70 pound-feet) of torque. Go for the turbocharged 0.9-liter unit and Renault will reward you with 93 hp and 135 Nm (110 lb-ft) channeled to the rear axle via a five-speed manual. At an additional cost, the turbo engine can work together with a dual-clutch, six-speed automatic gearbox. 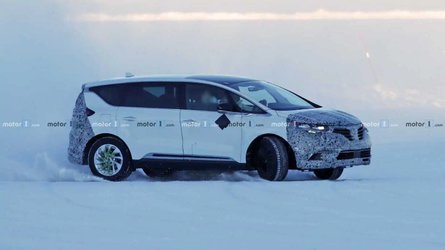 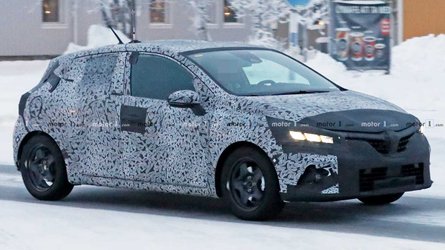 While these power outputs are not exactly impressive, let’s keep in mind the Twingo weighs next to nothing. In its lightest form, it tips the scales at just 914 kilograms (2,015 pounds) before options and rises to 999 kg (2,202 lbs) for the turbocharged version with the automatic transmission.

No word about the slightly hotter Twingo GT just yet, but we probably won’t have to wait much longer to see the facelifted version. Meanwhile, the regular 2019 Twingo will make its public debut in March at the Geneva Motor Show.