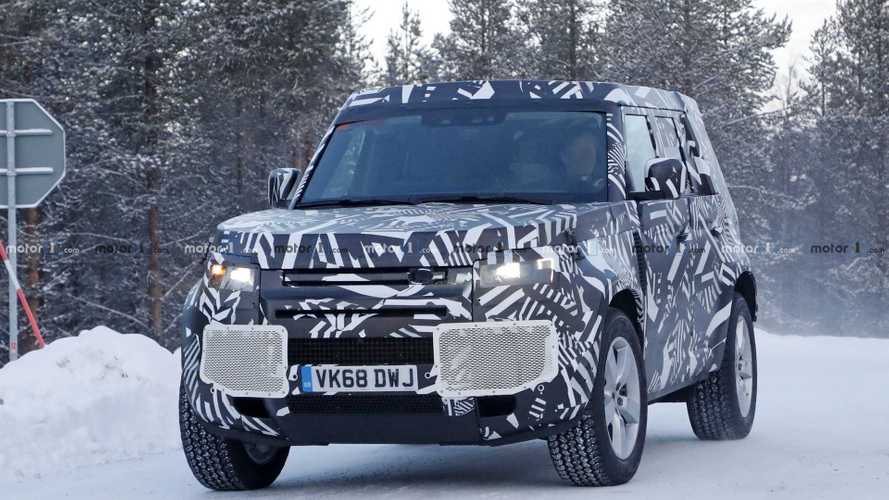 Work on the iconic SUV continues.

Land Rover is busy working on the triumphant return of the legendary Defender off-roader. We’ve seen several prototypes testing on public roads and this new fresh batch of photos shows another trial car in a winter wonderland.

Again, we are looking at a four-door Defender but this time it’s featuring a different set of alloy wheels. It looks like the British automaker is testing some kind of regenerative braking on the front axle as there are small additional sensors attached to the brake disc.

If that’s really the case, we might be looking at a hybrid prototype of the off-roader but nothing can be said at this very early stage of development and testing. Even if this is indeed an electrified vehicle, it’s clearly not a purely electric machine as there’s a massive exhaust at the back. Just behind the exhaust, there seems to be a retractable tow bar.

The generous amount of camouflage is not letting us take a look at the Defender’s final shape but we dare to believe this prototype is wearing production headlights and taillights. We might be wrong, of course, especially given the somewhat weird rear light signature.

We know for sure the boxy SUV will ditch its old-school looks for a more refined and aerodynamically-optimized design. Purists may be unhappy to hear that, but Land Rover’s main goal is to shift more units. In addition, stricter emissions regulations will also impact the overall look.

Under the skin, the 2020 Defender is set to gain a fully independent suspension setup. It should provide a better ride quality on tarmac and also improve the vehicle’s overall driveability. A modern diesel engine is rumored to be installed under the hood for some markets, while a hybrid powertrain will become the first in the history of the Defender.

Speaking of markets, Land Rover has already confirmed the revamped SUV will arrive in the United States in 2020.