The big three-row off-roader is expected to return to the Euro market later this year.

The Mitsubishi Montero disappeared from U.S. shores way back in 2004, but the model endures as the Pajero in several markets around the globe. The current-generation SUV debuted for the 2016 model year in Asia and Australia, and spy photographers caught the forthcoming facelifted Sport model on camera for the first time. As you can see, the three-row SUV is exercising in the snowy landscape of northern Sweden for some decidedly cold-weather testing. 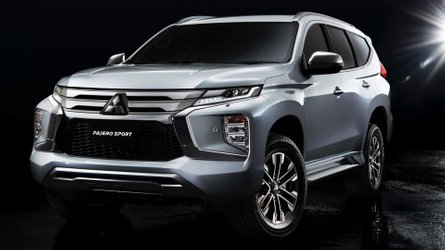 We don’t have much information about specific changes at this time, though a comparison of the current model with the wrapped prototype here suggests exterior differences will be minimal at best. We can clearly see new taillights, and a tweaked rear fascia could be hiding new body lines under the camo. Changes to the front are easier to spot, with a set of driving lamps positioned below the main bulbs similar to what we see on the Eclipse Cross. Changes to the grille are likely obscured behind that masked panel.

Interior updates are thought to be minor, and little is known about power options. Current thinking is that it will launch with a modest 2.4-liter engine burning either gasoline or diesel. And since the world as we know it is gradually going electric, a hybrid model could eventually show up.

Perhaps of more significance here is that the facelifted Pajero is expected to reach beyond the Far East and Australian regions and return to Europe, possibly being called the Shogun Sport. As a big three-row SUV built around the L200 pickup truck, it should offer some legitimate off-road performance along with seating for seven people. Whether or not this is a precursor to the Pajero returning to the U.S. as a Montero is completely unknown. The Outlander currently holds station as Mitsubishi’s North American three-row people mover, but the Montero would offer considerably more off-road prowess.

We expect the refreshed Pajero Sport to arrive later in 2019.