It's either that or some accessories to make the eight-seat crossover more rugged.

Prior to its debut as a production model this week at the Detroit Auto Show, the Kia Telluride made a couple of appearances at the New York Fashion Week and at SEMA. On both occasions, the large-and-in-charge crossover was fitted with an assortment of rugged accessories to give us an idea of how an off-road-oriented variant would look. At NAIAS, the production-ready Telluride doesn’t have those extras, but Kia is not ruling out the idea of actually offering something along the lines of an off-road-ready variant.

Speaking with Motor Trend this week in Detroit, 2020 Kia Telluride’s designer, Tom Kearns, expressed the company’s desire to introduce the kind of goodies we saw back in November last year on the four concepts showcased at SEMA:

“I can't really speak to that right now," Kearns said, "but we're definitely interested in something along those lines, either for a trim level or accessories in the future.”

The black and orange Telluride models featured in the adjacent photo gallery were originally shown in Las Vegas, with the former going by the name of Baja Glider and the latter by Horizon Roamer. Extras like a custom brush guard, skid plate, snorkel, LED light bar, and chunky mud terrain tires reflected the adventurous side of the large crossover.

On a related note, Kia America's chief operating officer, Michael Cole, told Motor Trend the company’s flagship SUV will be offered exclusively with the 3.8-liter V6 engine pushing out 291 horsepower and 262 pound-feet (355 Newton-meters) of torque. In other words, Kia’s biggest vehicle ever will not get the Stinger’s twin-turbo 3.3-liter V6, which pushes out a meaty 365 hp and 376 lb-ft (510 Nm).

Scheduled to go on sale next year, the Kia Telluride will be built at the factory in West Point, Georgia where the Optima and Sorento also come to life.

All you need to know about the 2020 Telluride is here: 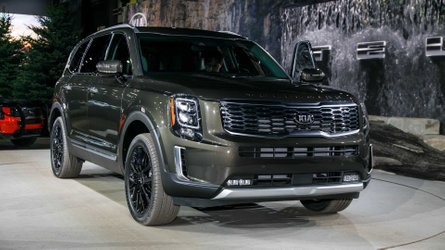 2020 Kia Telluride Arrives In Detroit With 8 Seats, V6 Power
By: Adrian Padeanu
++
Got a tip for us? Email: tips@motor1.com