New Ram HD Teased Ahead Of Detroit Reveal On Monday

Billed as being "the most capable heavy duty pickup truck ever."

Even though fully revealing spy shots of the new Heavy Duty emerged onto the Internet more than a month ago, Ram insists on teasing its next-generation HD. Ahead of its official debut slated for January 14 at the North American International Auto Show, the workhorse is being previewed on YouTube through a couple of videos providing a glimpse of what to expect on Monday. 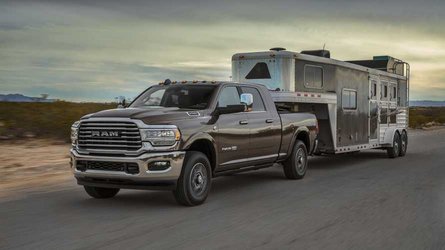 The video attached above promises the new HD will be “the most capable heavy duty pickup ever” in terms of towing, torque, and payload. As for the video at the end, it shows the fancier Limited trim, which will enable the next-gen Heavy Duty become “the most luxurious heavy duty pickup in its class” along with the Laramie Longhorn.

Having seen the spy images, the cat is pretty much out of the bag in terms of both exterior and interior designs. We’re expecting the cabin to be a spitting image of the 1500’s interior, while on the outside there will, of course, be some 1500 similarities, but with variations depending on the trim level.

The only piece of the puzzle that’s missing is the engine lineup, though we should probably be expecting a pair of V8 gasoline units along with a six-cylinder 6.7-liter Cummins diesel in several power outputs.

Join us on Monday when all will be revealed ahead of a market launch slated for later this year for both the 2500 and 3500 series. In the meantime, check out the adjacent spy shots showing prototypes undergoing final testing in various trims and with little or no camouflage whatsoever.