The entry-level Jag has a modest facelift coming later this year.

Our spy team snapped some fresh photos of Jaguar’s facelifted XE sedan, giving us a look at two distinct models undergoing some real-world testing. The car caught in the rain features a dual-tipped exhaust outlet on the left side, which is almost certainly the diesel-powered model. The XE in dry conditions with the black roof sports dual exhaust ports out the back, which is likely the turbocharged four-pot burning good-old gasoline. 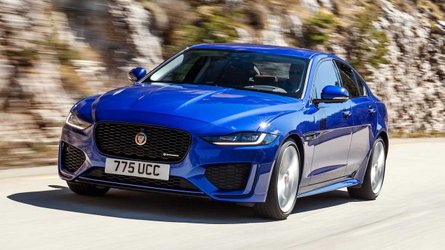 As with previous spy shots, both cars are wearing extensive camo wrappings but we believe there’s very little changing beneath it. A redesigned fascia with different lower intake openings can be seen up front, along with the XE’s new LED headlights. A similar subtle update is expected at the back with tweaked tail lights, and it’s possible some very minor changes to trim could be in store for the sides. Looking very closely, however, we’re hard-pressed to see any reason why Jaguar has so much camo wrap on the car. That is, other than to garner some attention.

Very minor changes are expected inside as well, with a revamped infotainment system being a likely proposition. The refreshed XE is expected to gain a hybrid option as well to accompany the diesel and gasoline powertrain choices currently available.

The XE is the entry-level Jaguar, pitted against the likes of the BMW 3 Series and Audi A4 but it’s not quite as successful as those long-established models. Jaguar actually canned the high-performance supercharged V6 version in the UK, though U.S. buyers can still order the 380-horsepower (283-kilowatt) mill. The wrap should come off later this year for a full reveal as a 2020 model, but with lackluster sales and the increasing popularity of SUVs, this refresh could mark the final evolution for the young sedan.